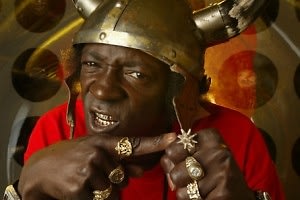 Considering both Bill Gates and Mark Zuckerberg dropped out of college and Sir Richard Branson didn't even go, Adelphi University graduate (and living anti-drug PSA) Flavor Flav is in line to become the most successful businessman of the modern era. Oh, you didn't know? Well then cancel your bottle service at Teddy's tonight and invest in Flav's hot new Fried Chicken and Liquor business!

Really, we should be saying businesses, as Flav plans to hit the ground running with two separate but equally horrifying business ventures. But let's let him explain!

"Yo, check this out," said Flav. "I want you all to keep on the lookout – it should be on the shelves by January – I'm launching a thing called 'Le Flav Spirits'. I'm comin' out with a cherry vodka, a berry vodka, an olive vodka, a sweet tea vodka, a bubblegum vodka and grape vodka. Also, I'm comin' out with 'Le Flav Cognac' and 'Chateaux Le Flav' which'll be some bubbly. Champagne, that's right folks – Poppin'n'drinkin'!"

"I'm also launching FFC – ya'll heard of KFC right? – well this is FFC, Flav's Fried Chicken. The Colonel better watch his back, G! The Colonel might end up in my fryer!" 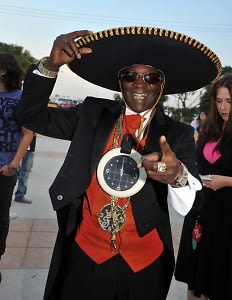 The million dollar question: would you buy these products?

Think for a moment before reflexively answering no. The chicken restaurant may never get off the ground, but do you know how easy it is to get distribution for your vanity liquor brand? And unless he's up all night brewing it himself, who's to say that FLAVored sweet tea vodka won't be absolutely delicious? Is it really more embarrassing than paying $30 for two shots of Patron because you heard about it in a rap song?

Patronizing impulses aside, think honestly about your friends: the hipsters, the VH1 watchers, the late 80's hip-hop enthusiasts. You don't see at least three people you know showing up at some point with a bottle of Chateaux Le Flav?

Money spent ironically is still money, after all.