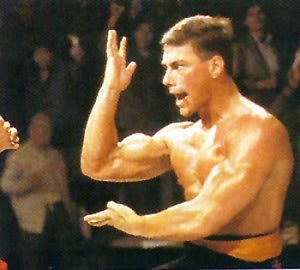 [Photo via BleacherReport] If you pretend to do something enough, you might just get good enough at it to do it in real life without dying. At least, that's what future coma patient Jean-Claude Van Damme is banking on as he prepares at age 50 for his kickboxing debut against Olympic gold medalist Somluck Kamsing. Let the rubbernecking begin!

To be accurate, it won't be JCVD's first professional fight ever- just the first one in 30 years. And why get back in the ring now, at the age of 50, with his best work and physical shape far behind him? Well, let's let him explain himself:

Aside from the extremely inaccurate impression that his posters are still hanging on the walls of anyone under 25, I feel like we can cut Jean-Claude a break here. He seems to be legitimately emotional as he contemplates how Street Fighter and/or his deep love of cocaine (once rumored at about $10k/week) may have thrown his career off track. His road to redemption may have started with an extremely honest and self-deprecating performance in the semi-autobiographical JCVD, but it seems like he won't consider it complete until, like one of his heroic characters, he's learned to believe in himself once again. 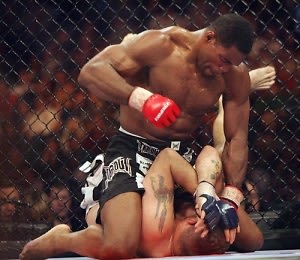 Though there is every reason to believe that this will end with a very somber funeral in Brussels, let the picture on the left give Jean-Claude's fans a slight reason to hope. That's Herschel Walker, winner of the 1982 Heisman trophy and currently 48 years old. No word on whether he's willing to split whatever growth hormones he's taking with JCVD, but let's hope so.

The fight is scheduled for next year in Vegas. Van Damme is hoping to sell the training and buildup to the fight as a reality show...