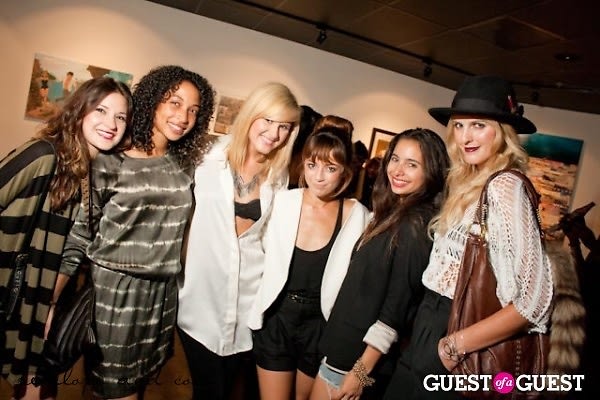 Go HERE for more photos by Anu and tag yourself and your friends!

Studs, sequins, and shoelaces were the guests of honor at Saturday night's Penelope and Coco launch party and spring '11 preview at Hold Up Art gallery.  The shoe line designed by Marisa Spinella gives fashion-forward footwear a fresh face, and just in time for... well, we wear our boots year-round in L.A.

Amongst the gallery's art work, featuring illustrations of the Penelope and Coco line by Paperfashion's Katie Rodgers, shoes were displayed as their own masterpieces to showcase the detailing and meticulous stitching of these casual-chic boots. With names like Ruby K., Capone, and Gypsy Rose, the boot styles, like their monikers, are meant to be part playful, part serious (think combat boots with sequins).

Hors d'oeuvres likewise featured interesting combinations of sorts, courtesy of newish downtown eatery, The Gorbals.  Bacon wrapped matzo balls (certainly not kosher) and Vietnamese watermelon salad were just a few of the eclectic eats guests could indulge in while admiring the stylish footwear.

A large turnout of friends and fans came out for the soiree, including former tween pop star, JoJo (who, at 20, ain't so tweeny anymore).  With a DJ, fresh footwear to add to shopping wish lists, and tasty treats, the party was an auspicious precursor to a new line of shoes we're sure will end up on the pretty little feet of fashionistas far and wide.