A mix of music industry insiders, artists, and fans filled the acoustically-designed Sonos Studio gallery on La Brea Monday evening for a listening party event with Moby presented by KCRW in anticipation of his latest album, Innocents, dropping October 1st. 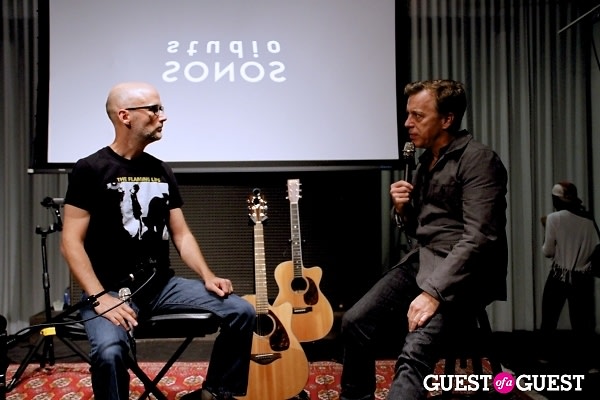 [Moby, Chris Douridas] For the first part of the evening, KCRW's Chris Douridas led a live Q&A with Moby during which he opened up about the process of creating Innocents, the music videos for its songs, his love of photography and new-found appreciation for Los Angeles where he is now a full-time resident. As his first album released since moving here, he discussed how his new hometown affected his work, explaining L.A.'s domesticity (as opposed to his former lifestyle in NYC), where people have yards, dogs, and a washer and dryer, was the main factor. He said Innocents is certainly not a club record and described its sound as quiet, domestic and provincial. As a NYC transplant now living up Beachwood Canyon, Moby also spoke about his love of Los Angeles, particularly its sense of community, accessibility, vastness and working artist population, within which he's found a place. And, as he noted, it wouldn't be the weirdest thing in the world if you spotted him sitting outside Cafe Gratitude. He also answered questions asked via Twitter sent by fans, including which music performer he would want to be other than himself and how his spiritual practice influences his work.
1 of 8