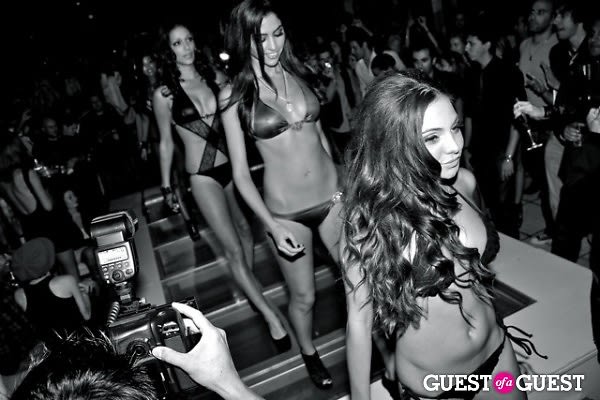 We accept the fact that L.A. Fashion Week isn't exactly on the same level of NYC's week of haute couture. So we don't tent parks for fancy runway shows with super models strutting the catwalk for world famous fashion houses. Instead, we throw bikini fashion shows in Hollywood nightclubs hosted by Playboy bunnies and reality TV stars.

And that's exactly how Beach Bunny did it for their Spring 2011 collection on Wednesday night at the Colony.  With Playmate and Brody Jenner ex from "The Hills" Jayde Nicole acting as both host and model on the runway, it was the epitome of what L.A. Fashion Week should be. Among the looks from this sexy lingerie-esque swimsuit line, a crowd favorite was a black and silver monokini perfect for a weekend in Vegas or perhaps on a yacht in St. Tropez. The catwalk also showcased the new collection by the Kardashian girls, naturally.  It just wouldn't be a paragon of how our town does fashion week without them involved somehow.

Amongst the attendees, another former "Hills" star, Doug Reinhardt was spotted, as well as fashion forward stylist Natalie Yuri. And while Jayde's new man Jesse Waits, brother of Paris Hilton's flavor of the week, Cy, (remember, the one who got the DUI when Paris got busted with blow in Vegas?) was noticeably missing. But his absence was more than made up for by the rapping secretary Chanel West Coast of MTV’s "Fantasy Factory".

With sexy bikinis, eye candy of the Playmate variety, and reality stars aplenty all set in a trendy SBE nightclub, the event was a huge success. Après the fashion show, the sparklers were lit, the bottles were poppin' and the Beach Bunnies were dancing in the midst of it all. And that's sort of L.A. Fashion Week in a nutshell.