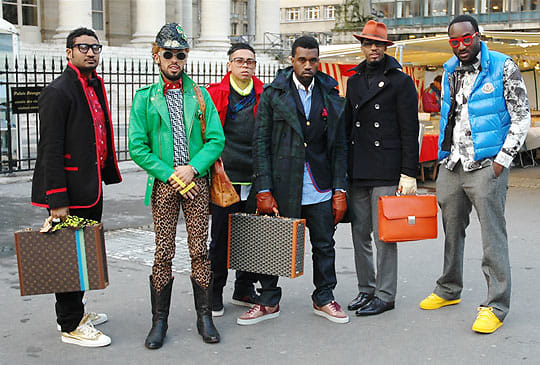 Say what you will about Kanye West's ego, but the man doesn't tend to half-ass it. As a producer, he's made thousands of beats including those which would become the basis for Jay-Z's classic Blueprint, has five platinum albums to his own rap career, and in pursuit of his passion for fashion, recently interned at Fendi. Now rumors are swirling that he's hard at work on his own womenswear clothing line to be unveiled at NY Fashion Week in September.

Despite the fact that he's standing next to a man in a green leather jacket and skintight leopard print tights in the above photo, I'm still going to say that we shouldn't bet against him.

It's pretty clear that Kanye knows his fashion; any rapper can drop Gucci or Prada references, but it takes a daily Womens Wear Daily reader to bust out Philip Lim and Jeremy Scott in a verse, or to wear a women's Celine printed shirt at Coachella (and, to be fair, he kind of pulled it off).

And while all of that is a good start, it's also comforting to know that Yeezy isn't just grabbing a pair of scissors and going it alone: if Grazia's "excellent sources" are to be believed, Kanye's hired English knitwear designer Louise Goldin to oversee the design, and the woman who taught Alexander McQueen, fashion professor Louise Wilson, to give him a one-on-one crash course in professional style.

So I'm going to withhold mockery until the line actually debuts, because honestly, it might be pretty good. And even if it sucks, get used to it, because when one of the world's most popular rappers comes out with a high fashion line, you can expect to hear the brand name roughly 400,000 times in songs and see it absolutely everywhere. Bring back Wu-Wear!!!!