About this event
Coming on like a teenage Joan Jett with a drum machine, all Pulp Fiction bangs and kaleidoscopic baton swinging, Zowie is a futuristic cheerleader from planet Wow. A whip-smart 22 year old karate-proficient Antipodean with a penchant for percussion, a hyperglycemic imagination and a dizzying creative ferocity Recently signed to Sony Music she released her debut single “Broken Machine” in Australia and New Zealand and it debuted in the top 5. Zowie is due to land on US shores in October for shows in Los Angeles and at the CMJ Marathon in New York City. Color us excited. With Astronaut Academy and We Are the Arsenal. 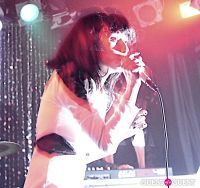