UNICEF Next Generation hosted its fourth annual UNICEF Masquerade Ball in Los Angeles on Thursday, October 27th 2016. The event brought together hundreds of Los Angeles' most influential young professionals at the iconic Clifton’s Cafeteria to ring in Halloween and celebrate UNICEF’s work to save and improve the lives of vulnerable children

The event, which was hosted by UNICEF Next Generation Los Angeles Steering Committee, raised over $235,000 to support UNICEF’s lifesaving work, including programs to prevent violence against children in Jamaica. For more information, please visit www.unicefusa.org

Musician Devendra Banhart was the DJ for the evening, and the event also featured performances by Cold War Kids, Josh Hoisington and LOLO, Jackie Tohn and The Clover String Quartet. 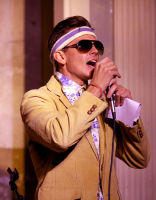