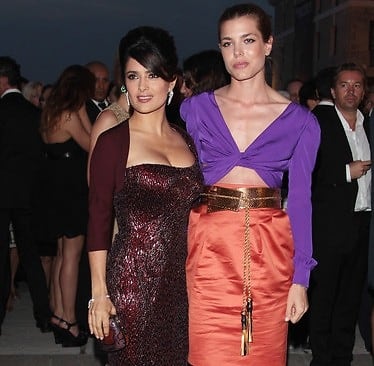 [Salma Hayek, Charlotte Casiraghi via] Even though it doesn't officially begin for another couple of days, international celebrities, socialites and art lovers are already flocking to Venice (the Italian one) for the 2011 Venice Biennale, obviously to get a head start on the parties. You didn't think they were just going for the art, did you? The area is primo party crasher terrain this week, filled with truly fabulous people who have lots of money to spend on the finer things in life at spectacular events, like Tuesday night's Il Mondo Vi Appartiene dinner held at Fondazione Cini. Now, to the important part: who wore what. The night boasted quite an impressive spectrum, from haute couture to murses, pieces that look like were stolen from the wardrobe archives of "Dynasty", and showstoppers, so join us on an adventure in Biennale style from Italy's Floating City. 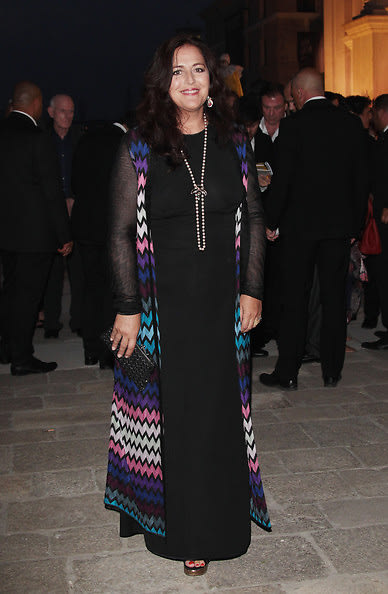 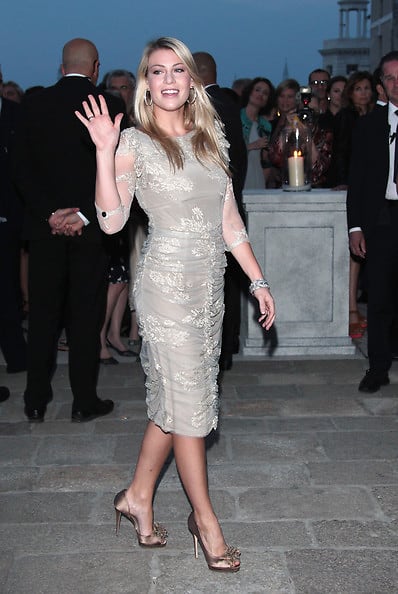 Angela Missoni: Sometimes I wish I were born into the Missoni family.  Maybe there's someone I can marry? Because then I could have more chevron-patterned and striped knits than god, like Angela Missoni, and just pick a really beautiful, expensive one up off the floor of my bedroom as I'm running late to some champagne party on a yacht and just be like, "oh, this old thing?" about it, and still have one of the coolest looks going on that night. Yeah, I'd totally murder that effortless chic thing if I were a Missoni.

Barbara Berlusconi: I don't hate Barbara Burlusconi's outfit, but I don't like it. It makes her look like she could benefit from one of her father's bunga bunga parties (if he weren't her father). The problem is, it looks like she put some thought into this ensemble, selecting it from what must have been dozens of options, finding the right shoes to match, jewelry and all that, and yet it's boring and forgettable. Also, I feel like I've seen Helen Mirren in this dress, and that would be appropriate. But Babs is only in her 20s, and not a white-haired Dame who looks phenomenal for being in her 60s. We're not there yet, Babs. 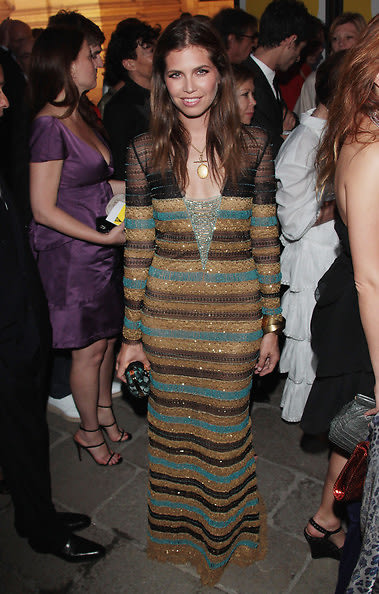 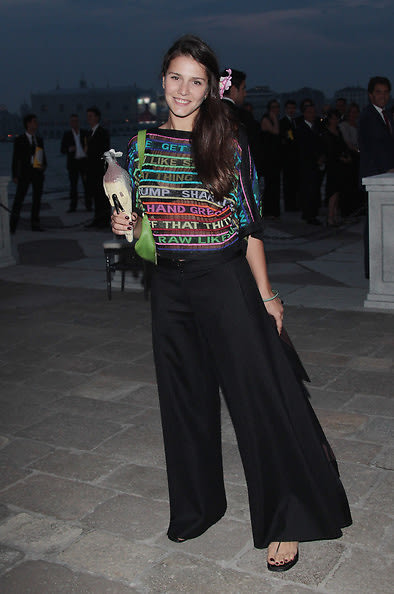 Dasha Zhukova: Love it. I'd rock it. Stripes and sparkly fabric are bold choices but this dress doesn't scream COAS (Center Of Attention Syndrome). The see-through mesh on her shoulders is hot and makes the dress look delicate and light.

Margherita Missoni: Hmm. This was not her night. I think she knows that. Wait, I think it's actually written on her sweater? 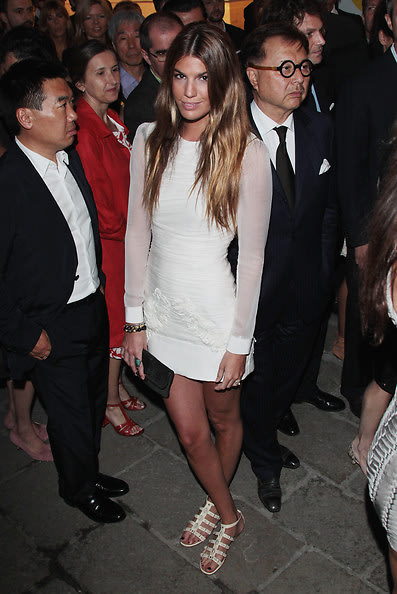 Bianca Brandolini D'adda: My favorite look of the night. Okay, sure, it helps that she happens to be a really hot model, but still. White on tan is always a great move. She was smart to keep it simple and stay away from bold accessories, despite this being a plain white dress. It's all she needed to look amazing with her beachy hair and I love that she's wearing flat gladiator sandals instead of heels. She was the cool girl at the party. 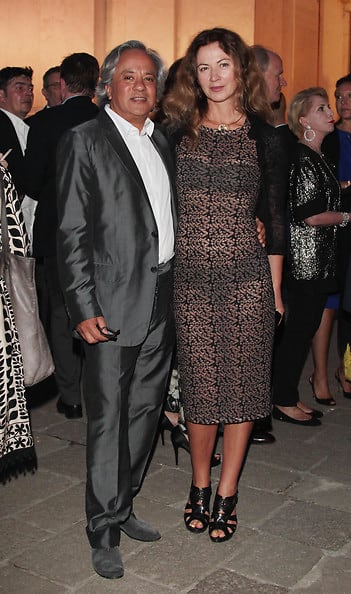 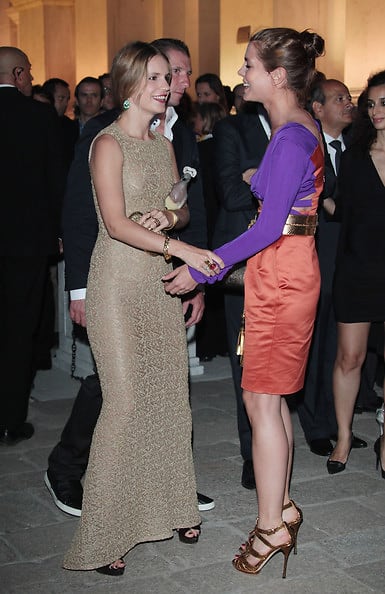 I don't know who this is on Anish Kapoor's arm, but I do know that dress is an Alaia, who's like, a totally important designer. That I *DO* understand, Cher. I know this because I was at a wedding this weekend and a friend wore this exact dress in a floor-length version. Fortunately, my friend tried it on in daylight and decided against wearing a bra and undies because of the effect we're seeing on the woman in the photo above on the left. It's a shame because it's a really beautiful dress, but how can you recognize and appreciate that when all you can see it this woman standing here in her panties and bra? And she has not a clue. None. Tragic.

Eugenie Niarchos: And here's the same Alaia in the floor-length version in beige. But it looks like Eugenie avoided the same mistake as Anish Kapoor's lady friend. Now can you tell it's a beautiful dress? 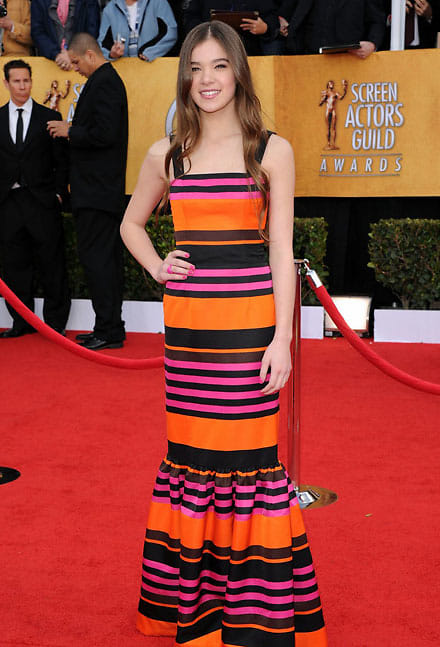 Warly Tomei Mantegazza: I'm a huge fan of this dress. Prada knows what they're doing. In the long version it made Hailee Steinfeld look hip and sophisticated at the SAG Awards, it was just adorable on her. And here it is in the short version still very age-appropriate on Warly Tomei Mantegazza. But that matching clutch is killing me. 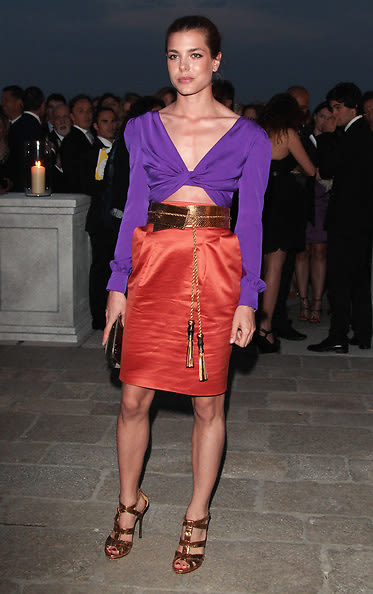 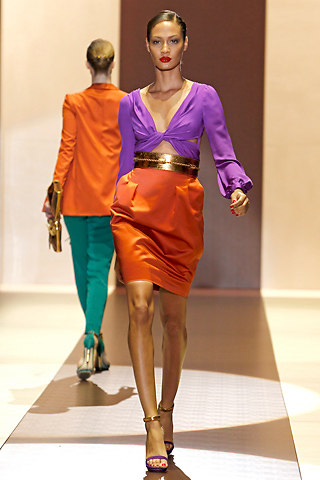 Charlotte Casiraghi: Oh, SNAP. Look who just worked it in that straight off the Spring/Summer 2011 Gucci runway! 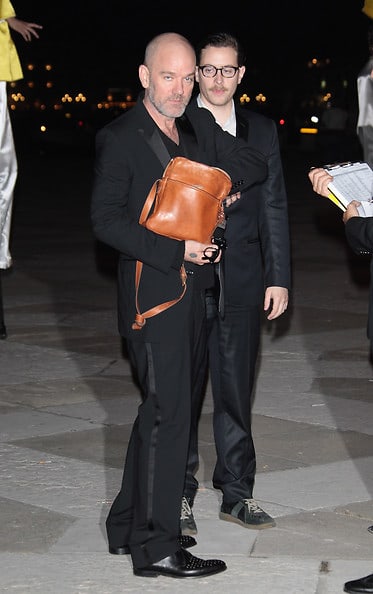 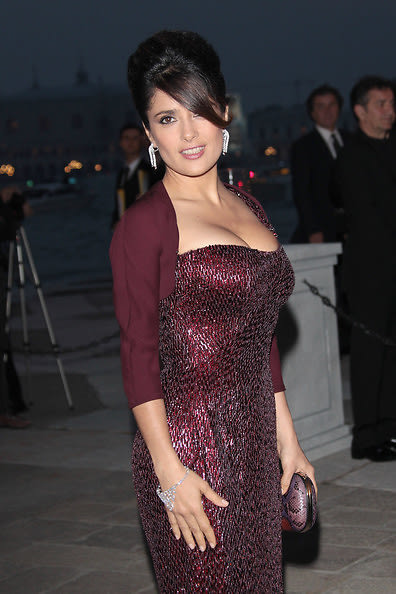 Michael Stipe: Dying to know what's in that murse.

Salma Hayek: Joan Collins called. She's furious. Absolutely furious. She was saving this for her nephew's bar mitzvah. Kinda effed up of you, Salma.