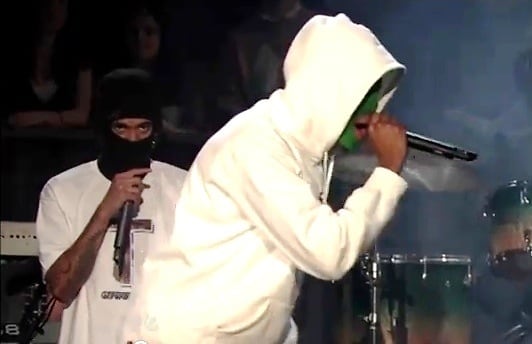 Wednesday night, L.A.'s most buzzed about hip-hop act took over "Late Night With Jimmy Fallon" for a performance so insane in the best way, that it reduced Mos Def to a shrieking 12-year-old Bieber fan. Although Odd Future Wolf Gang Kill Them All or OFWGKTA rolls deep as a 10-member hip-hop collective of skater teens ages 16-19, only Tyler the Creator and Hodgy Beats played Fallon, but that didn't seem to detract from their ability to put on an electrifying show. Shit got realer than real when Odd Future took the stage for a performance of their song "Sandwitches".

Rather than trying to describe it in words which would never do it justice, see them get radical for yourself in their outrageous Fallon performance backed by The Roots: