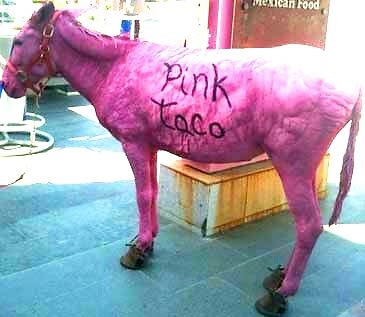 When you run a less than authentic Mexican restaurant with a name that's a euphemism for a vagina located in a yuppie mall, you're already fighting an uphill battle for credibility. Something tells me humiliating nature's saddest animal won't help with that. But don't tell that to Pink Taco in the Century City Mall, who made national headlines last week by chaining a shaved, spray-painted donkey to their front door to celebrate a regional Mexican military holiday. Now, the restaurant has released a statement addressing the controversy. Wait—you weren't expecting them to admit they did anything wrong, were you?

You see, Pink Taco—which is kind of like a cross between a Chili's and the Van Nuys Spearmint Rhino—loves animals! According to a statement posted on their website [all sic'ed]:

"We'd like to clear up some misperceptions regarding the donkey, who made an appearance at the Cinco de Mayo event at Pink Taco in Century City on May 5th."

Two things: 1) We really appreciate how they refer to it as an "appearance" as if the donkey's hit a dry spell in the biz and trying to scrounge up some relevance, and 2) thanks for clarifying the date of Cinco de Mayo.

"We obtained a permit from the city to have the animal on site and the pink coloring used on the donkey was a safe, water-based and commonly used on animals in the entertainment industry. Additionally, the donkey's trainer escorted him the entire appearance, he was on a leash, not a chain as reported in the media, and we provided plenty of water and care to him throughout."

Pretty sure whether it was a leash or a chain makes little to no difference to a burro, but we understand you need to claim your victories wherever possible.

"The employees of Pink Taco love and respect animals and would never do anything to harm or cause discomfort to an animal.

We Have since been in contact with PETA and Pink Taco has agreed to not use animals at our events and promotions an are looking forward to meeting with them and discussing how we can work together in the future."

OMG, so are we! Can't wait for a Pink Taco-PETA collabo.

"We are a socially aware brand and we appreciate our customers concerns regarding these matters."

So there you have it, you uptight animal loving crybabies! Pink Taco, you see, is not just about mid-range tequila and clever genitalia puns. It's also about respect. What kind of respect?

How about respect for those born with physical differences? 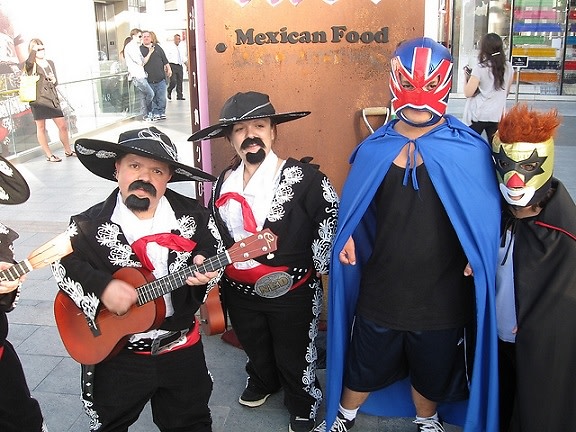 Or how about respect for religious iconography? 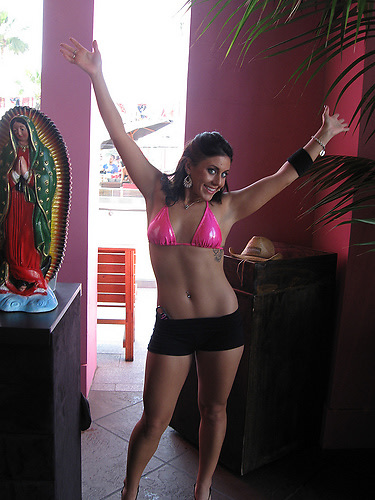 And, to reiterate, respect for animals: 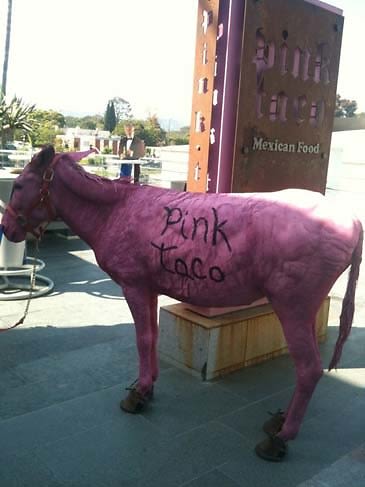 So yeah, if you've got a problem with Pink Taco, maybe you need to take a long hard look in the mirror at your own intolerance, pal. And the next time you and your bros are getting ready to head over to Busby's, maybe you should cruise by Century City instead for a Pink Taco Platter and some "Rico Suave" Margs. After all, it's up to all of us to to reward "socially aware brands." ¡Salud!

[donkey photo via, all others via]