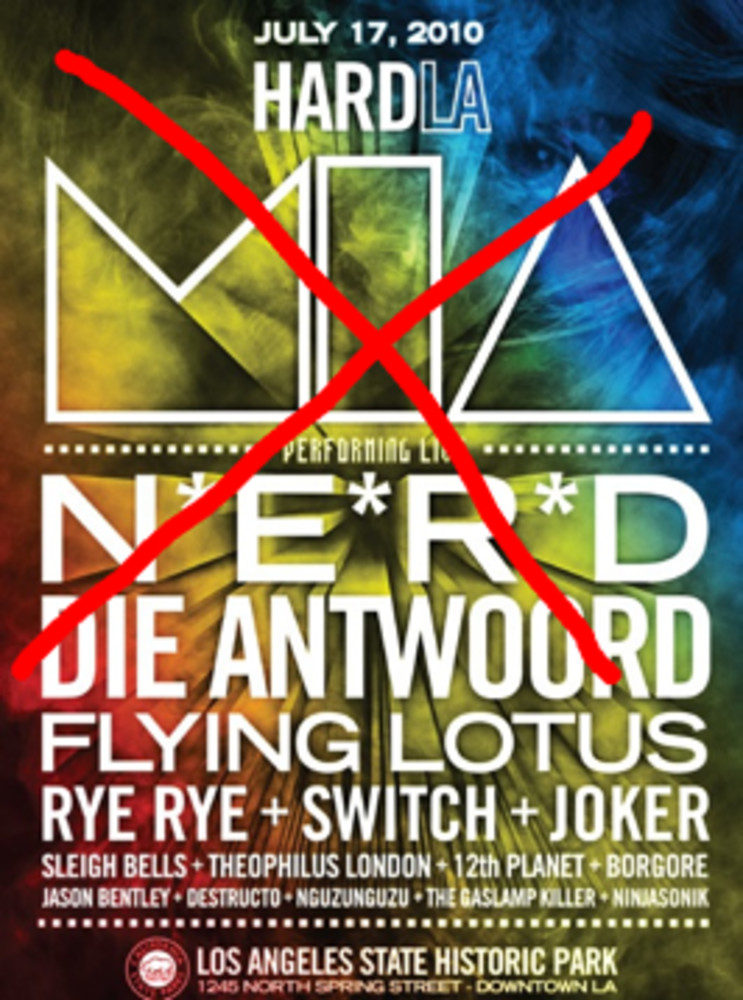 Thought you were going to see M.I.A and N.E.R.D this weekend? Think again. News broke yesterday that HARD L.A., the highly anticipated rave featuring these top performers scheduled for this Saturday, has been canceled.

As of yesterday, reports from HARD L.A.'s promoter Gary Richards, better known as Destructo, and Biz3, the PR agency for HARD, confirmed the event is no longer happening.  Might explain why the show's publicist at Biz3 couldn't take a call with us yesterday, as she was probably busy putting out fires and scrambling to draft up her press release with the sad news:

Reasons for the cancellation include poor ticket sales (which Destructo refused to comment on) and L.A. County's recent establishment of a rave safety task force in the wake of last month's Electric Daisy Carnival, which sent over 100 to the hospital for drug-related incidents, resulted in more than 200 reported injuries, and the tragic death of a 15-year-old girl.  Much controversy has ensued surrounding EDC and the drugged-out dance parties, and extra precautions are being taken by all parties to ensure the safety of audiences who attend them. Shows' camps and PR team have insisted that they support and work closely with the LAFD, LAPD, City of L.A., and California State Parks. Despite this, and the possibility of poor ticket sales, we suspect the cancellation was the result of the city putting pressure on HARD to put the kibosh on their upcoming rave.

Acts that would have headlined Saturday's show included M.I.A., N.E.R.D, Sleigh Bells, and Flying Lotus who  the heartbreaking news yesterday:

Yes, the news is disappointing to say the least. But there's light at the end of tunnel for those who still want some HARD, with the upcoming HARD Summer Music Festival featuring Soulwax, Crystal Castles, and more. Destructo promises the event will be huge and make up for the show that never was.  And don't get too bummed about your Saturday night being shot since the show is off; HARD is putting on another that night with DIE ANTWOORD, Destructo, and Borgore at the El Rey Theatre. See the details on out Calendar.