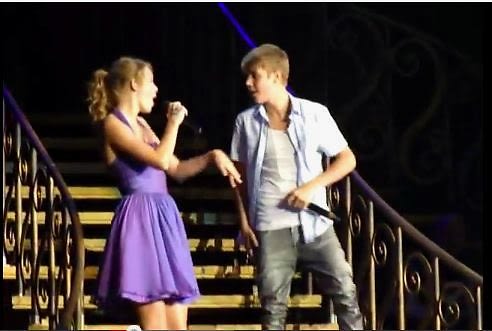 [Taylor Swift, Justin Bieber] What was only set to be your garden variety mega-concert at Staples Center turned into a full-blown hormone-erupting pop music supernova last night when The Biebs made a surprise appearance on stage during Taylor Swift's show. The hysterical shrieks of 15,000 men, women and children filled the arena in the middle of her set when Taylor asked, "would it be alright if I brought out my friend Justin?" as Justin Bieber emerged from the shadows and swaggered out onto the stage in silver skinny jeans.

In this surprise extra special treat for the L.A. audience, the young stallion and Swift busted out a duet of his "Baby" as the entire Staples Center wept and recorded with their camera phones. Watch the magic unfold:

Wow, that was HOT. Do you think Selena is going to be okay? She seems pretty cool about everything. Either way, it warms my heart to think about how many fans' ultimate OMG dreams he made come true last night. As for everyone else going to Taylor's three remaining L.A. shows at Staples Center, it feels like Justin's appearance last night was a one-time deal, but who knows? Never stop Beliebing.