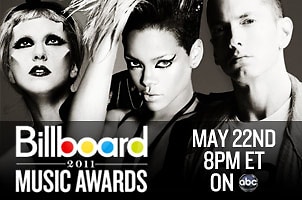 LAST DAY TO ENTER!: GofG L.A. wants to send you and a friend to the 2011 Billboard Music Awards this Sunday. Thanks to Chevrolet, we have FIVE PAIRS of tickets to give to FIVE lucky winners to attend the Las Vegas awards show which features a mega lineup of live performances from some of music's hottest artists, including the Black Eyed Peas, Rihanna, Keith Urban, Taio Cruz, Cee Lo Green Nicki Minaj, Pitbull, Kesha, Far*East Movement, OneRepublic, Ryan Tedder and Ne-Yo! Keep reading to find out how you can enter to win a pair! **CLOSES TODAY AT 5PM PST**

But back to the tickets, we have FIVE PAIRS to give to FIVE DIFFERENT winners who will each be able to bring a friend with them to the 2011 Billboard Music Awards THIS SUNDAY, May, 22nd at 5pm PST at the MGM Grand Hotel in Las Vegas. To enter to win a pair start following us on Twitter if you don't already and just Tweet "@gofgla take me to the Billboard Music Awards."

We'll be selecting our winners TODAY, May 20th at 5pm PST, so better get to tweeting if you want to snag a pair!