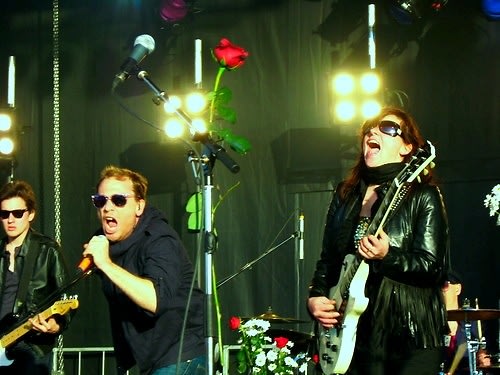 Because we're not having fun unless you're having fun, we're giving away two pairs of tickets to the Stars Thursday night (October 18th) show with supporting acts Diamond Rings and California Wives at The Mayan! Keep reading for details on how enter to win.

Stars is a Canadian band currently on tour to support their album The North, released last month. Last year their music was featured in the film Like Crazy, which makes sense since their tunes have been called beautiful and eloquent indie pop. Diamond Rings is the moniker of John O'Regan, and he's well known for altering his appearance to transcend traditional gender roles in his videos and his live performances. Oh, and his music? Well, he's received the thumbs up from Pitchfork, among others, so that's good! With a setting like the Mayan Theatre this is sure to be an unforgettable show! Read on to find out how easy it is to enter the giveaway! [Top Photo via]

All you need to enter for a chance to win a pair of tickets Stars' Mayan Theatre show (courtesy of our good friends at Goldenvoice) is a Facebook or Twitter account, then just head to the Guest of a Guest Facebook page, make sure you 'like' us and tag yourself in this photo, and/or follow us on Twitter and Tweet @GofGLA telling us why you want to win (doing both ups your chances)! If you're a huge Stars fan, you should try to convince us to choose you in a comment underneath the Facebook photo too. We'll pick both winners TODAY, Wednesday by 2 p.m. PST so hurry up and enter!