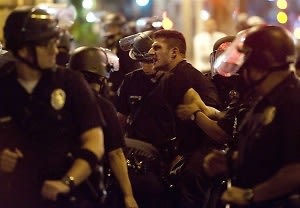 At least 19 are arrested and 5 police officers treated for injuries at the Downtown ArtWalk after riot cops attempted to break up a "Chalk Walk" associated with the Occupy L.A. movement. [LA Times]

Michael Clarke Duncan of The Green Mile fame is resting in the ICU at an LA-area hospital after going into cardiac arrest this morning. Paramedics say that his girlfriend, Omarosa from "The Apprentice", saved his life with some well-timed CPR. [TMZ]

Giovanni Ramirez, who was originally arrested and held in custody for 10 months (though never officially charged) for the severe beating of Giants fan Bryan Stow in the Dodger Stadium parking lot, is suing the City Of L.A. and LAPD Chief John Beck for emotional distress and damage to his reputation. [LAist]

Famed visual artist John Baldessari resigns from the MOCA Board of Trustees in protest over the museum's decision to fire chief curator Paul Schimmel, calling it an act of "conscience." Baldessari is the fifth Trustee to resign since February. [LAist]