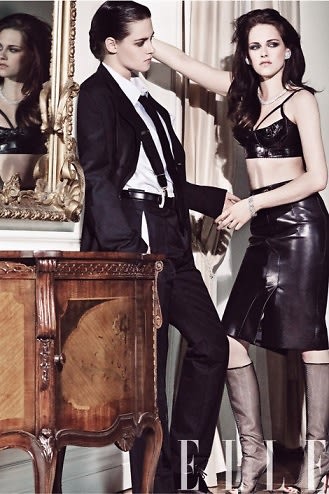 Britney Spears really cleaned up with this deal that pays her $15 million to be a judge on the upcoming season of Simon Cowell's "X Factor" reality TV singing competition that I hope to go through life having never seen. [TMZ]

Jay-Z sits down for real talk with CNN and declares his support for President Obama's endorsement of gay marriage saying it was "the right thing to do" and straight-up equates marriage inequality to racial discrimination. [HuffPo]

Because parking in Santa Monica isn't a big enough bitch, the city unveiled over 6,000 "greedy" "smart" parking meters yesterday that reset after a car leaves using ground sensors so subsequent parkers can't use extra time left over in the meter and also refuse additional payments from parkers attempting to feed the meter who want to stay parked in a spot past an allotted time. [NBCLA]

Check our June covergirl Kristen Stewart's gender-bending photo shoot shot by Tom Munro for the upcoming issue of Elle magazine, posing as a dominatrix-like woman having a sexual moment with herself dressed as a man in a suit. [Radar]

Due to what conservative Islamic groups refer to as her "Satanic lyrics" and provocative performances, Lady Gaga is banned from the nation of Indonesia and will not be able to perform at her June 3 show for the 52,000-person audience in Jakarta. [E!]