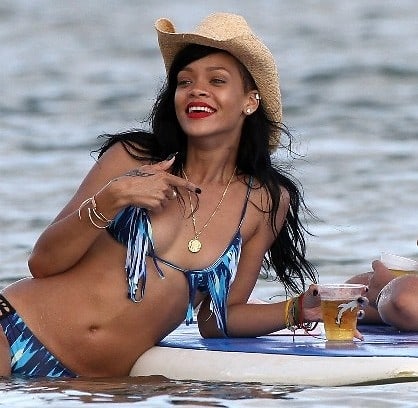 Now that the slightly over $2 billion purchase of the L.A. Dodgers from Frank McCourt by the Guggenheim Group, which includes Magic Johnson, Stan Kasten and Mark Walter, is finalized, the new owners will hold a press conference this morning to discuss their intentions for the franchise. [KABC]

For the second time in a span of just 10 days, Wiz Khalifa—whose surprise appearance on stage with Snoop included sharing a blunt while performing at both Coachella weekends—is ticketed for marijuana possession after cops find 11.39 grams of herb on his tour bus in North Carolina last night. [TMZ]

Two-year-old Emmelyn Roettger, a Washington D.C. toddler who can not only read and write, but also school you on the butterfly metamorphosis process and mitosis, is accepted by exceptionally high-IQ society Mensa becoming it's youngest member ever. [DailyMail]

The world now knows Kristin Cavallari and fiance Jay Cutler, who announced their pregnancy in January, are expecting a boy thanks to Cutler's Chicago Bears teammate Earl Bennett who revealed the baby's sex during a radio show appearance. [HuffPo]

New Jersey mother Patricia Krentcil, whose complexion bears an uncanny resemblance to an antique mahogany leather couch, is arrested for allegedly letting her five-year-old daughter use a tanning booth at a tanning salon. [KTLA]

And in case you're wondering how Rihanna's been holding up during her grueling promotional tour for Battleship in Oahu, here she is in a bikini and cowboy hat using a surfboard as a table for that cold one she's sipping on in the middle of the ocean. [E!]