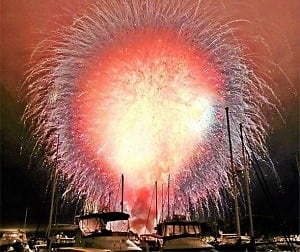 Port Of San Diego officials apologize for completely botching this year's "Big Bay Boom" 4th Of July fireworks event, and are reportedly attempting to investigate why, exactly, they accidentally set off ALL OF THEIR FIREWORKS at the same time, 5 minutes before the show was scheduled to start. Oops. There's video at the link. [LA Weekly]

The Biebs gets the cops called on him (by an L.A. City Councilman) for weaving through traffic at 90+ mph on the 101, but he claims that he was merely trying to escape a team of paparazzi cars that were aggressively harassing him. Maybe this is why teenagers shouldn't be allowed to drive $150,000 custom electric sports cars; my first car couldn't even get up to 90 mph. [TMZ]

Beloved film and television star and Oscar winner Ernest Borgnine dies in Cedars-Sinai hospital of kidney failure at the age of 95. I mean no disrespect whatsoever when I say that despite a wide variety of far greater accomplishments, I'll always love his work in BASEketball the most. [CBS News]

Roger Federer defeats Scotland's Andy Murray (he's only British when he wins, right England?) to win a record-tying 7th Wimbledon victory, regain the world #1 ranking, and silence the critics who were speculating that he was on the down-slope of his career. Serena Williams also impresses by winning her 5th women's title.  [ESPN]