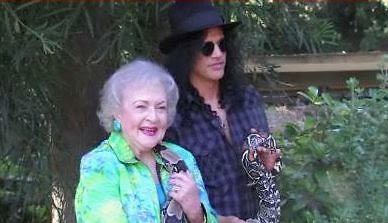 When I think of Slash, things like legendary guitar skills, seminal moments in rock history, hotel rooms that probably required the services of a priest before they were safe for new guests after his check-out, and heroin addiction come to mind. But now with this wrinkle in recent WTF news, he'll forever be linked to Betty White and environmental welfare thanks to the new promotional video he co-stars with the only living "Golden Girl" in for the Los Angeles Zoo's new exhibit.

But I have to say that just the idea of the 90-year-old adorable Betty White and the iconic rocker, who at one time considered a bottle of Jameson to the dome with Duff McKagan strung out on the floor and a couple of hookers somewhere in the room a "quiet night in," on screen together brings a smile to my face. Check out the two as they promote the L.A. Zoo's new Living Amphibian, Invertebrates and Reptiles (LAIR) exhibit, set to open March 8, in the video below:

Kind of cute, right? Betty White, a noted animal lover, has been a prominent co-chair and supporter of the Greater Los Angeles Zoo Association for decades so it makes sense that she would appear in the video. But Slash? I could see him in some kind of PSA about why you shouldn't try to set Chateau Marmont on fire or something, but not so much in videos for new, educational wildlife exhibits. I guess I'm not up on my Slash factoids because as it turns out, he is also a longtime backer of zoos, a trustee of the Greater Los Angeles Zoo Association, and has a very special affection for reptiles, or so says Wikipedia. So basically, he's the Jacques Cousteau of the rock and roll world.

Too bad he and Betty won't actually be a part of the LAIR exhibit experience—I would drop serious coin for a guided afternoon tour with those two.