Unlike most people in Hollywood - George doesn't just play a fashion authority on TV, he actually is one in real life - the everyday leading role as one of L.A’s most visibly stylish personalities. After his post as The New York Times’ style editor on the beat, George went TV, cohosting “Fashion Police” with his disgustingly hilarious and wonderfully iconic friend, the late Joan Rivers. When not talking who wore what best, George writes books, such as his fashion guide, aptly titled “Glamorous by George” bien-sur.

What do you actually do all day? Try to make things prettier.

Favorite song growing up? The Stroke by Billy Squier (cluelessly)

My biggest secret is… that I’m older than you.

Why do you live in Los Angeles? Jack, Janet * Chrissy asked me to “come knock on their door.”

My motto is… I’m not the motto type.

My alter ego is… on television.

The last drink I had was… a sugar free Red Bull en route.

My secret crush is… Duh, it’s a SECRET!

What was your first job? Stockboy at Lord + Taylor in Skokie, IL

If you had one day left to live in LA, what would you do? Get super wasted with family and friends.

Coming from? Going to? Coming from home / office - going back!

What is your favorite work of art? YOU ARE.

Who should we know? I dunno… there’s a lot of peeps here. You’re good. 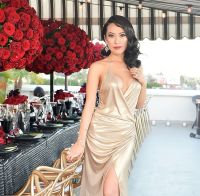