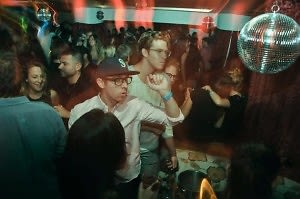 As Art Basel Miami Beach reached its 10th year anniversary, a celebration was an absolute must! Collectors, socialites, artists, dealers and art lovers gathered in Miami for a week long of art, fashion and, of course, parties. Check what parties and galleries Team GofG hit up!

[All photos via Billy Farrell Agency.]

The shenanigans all began on Tuesday November 28, promptly at 5pm, at the W South Beach. The V.I.P reception by the pool got everyone excited for the week as guests got together and mingled over cocktails and stood in long lines at the pasta bars at each end of the pool. Though the art world is a very small community, and everyone knows each other, it is only during times like ABMB when everyone gets to be in the same place and catch up.

After a few drinks and hors d’oeuvres, and a few kisses hello, and everyone headed back to their hotel rooms to freshen up before heading to the exclusive invitation only dinners. Most of the crowd first stopped by for a drink at Andrea Rosen’s, had dinner at Casa Tua, then hit a second dinner stop. Some headed to the Ferrari dinner, others to the White Cube dinner, but being an absolute fashionista, I just couldn’t miss the Dior/Almine Rech/Larry Gagosian dinner. Held next door to their new pop-up shop, Dior pulled of a beautifully chic evening. And if a great dinner invitation and a performance by VV Brown was all not enough, they presented each of us guest with one of their trendy new clutch from the collection that they just collaborated on with Anselm Reyle. 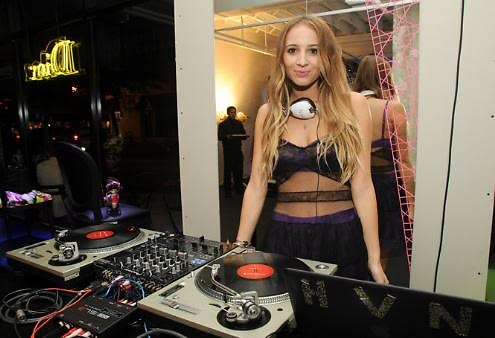 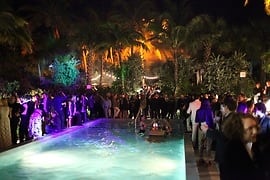 Goodie bag in hand, the word was out, White Cube was throwing an after party by the pool at the Soho Beach House. Elbow touching through the crowd, I was on a mission to try and make it to the other bar where my friends were standing, getting drinks from the bar which was IN the pool. The pool bar was only as half as exciting as the hush hush going around - the one and only Damian Hirst was there, and without a doubt he was the talk of the party.

[Scene of the White Cube party.]

Though it was way past everyone’s bedtime (considering Preview V.I.P. Opening for Basel was in the morning), this did not hold anyone back from heading to Le Baron at the Florida Room. The line outside was insane, and flashing your yellow invitation card or dropping names was not going to get you anywhere. Luckily, a friend got Team GofG in.

Preview day came really fast after not much sleep, but as they say, you have to be able to work hard and play harder. The quality of art this year was much stronger, in my opinion, than last year. I personally was very impressed with the quality of inventory at the fair. I saw numerous beautiful Anish Kapoor pieces, Fontana’s, Cindy Sherman’s, some great Lichtenstein works on paper at Gagosian’s booth, a very special Jim Hodges mirror at Gladstone, an amazing Calder sculpture from ’64 at Aquavella - but I have to say that my favorite piece was a precious little Jackson Pollock drawing from Matthew Marks. The work is so personal, intimate and different from all his other much larger scale works, while still having some of the same shapes visible to the bare eye. 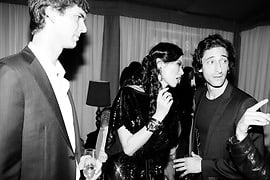 The week continued, as did the parties with The Dasha Zhukova/Louis Vuitton/Art.sy party, along with social dinner parties, the sightings as Le Baron, and transactions at the Convention Center. My head was spinning; it was time for a change of scenery (but really an excuse to go and check out the private collections).

My first stop was the De La Cruz Collection, then the Rubell Collection, and finally the Margulies Collection. The second I walked in I felt so many emotions. The de Kooning sculpture was spectacular and I was fascinated and the marks by the artist’s hands visible on the sculpture. The Nancy Rubin, the Ernesto Neto, the Michael Heizer, as I walked through the warehouse, I was more and more impressed. What a collection! 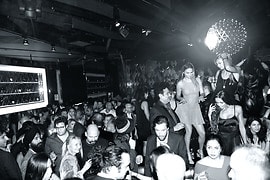 But of course in between all of this great art, there had to be more crazy dinner parties and debauchery. Most headed to the Aby Rosen and Samantha Boardman’s dinner at the Dutch. The chocolate cake was amazing, and the after party was next door. 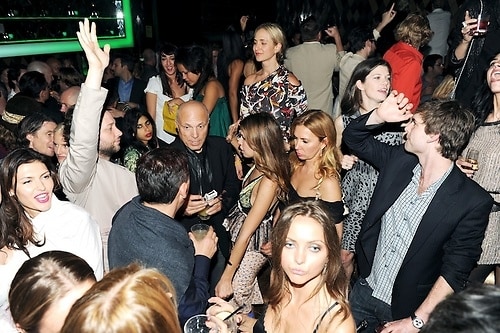 Dancing into Friday morning, the exhausted art crowd continued to socialize at various lunches and dinners, mingle at endless cocktails and pop-up shop openings such as Dior, Pringle, Urban Zen, DSQUARED2, Keds, Area Grey, among the many others. Many also took advantage of the weekend to go check out some of the other fairs such as NADA, Design Miami, Art Miami, Pulse, Scope and Art Asia.

Though it was hectic and intense, it was by far one of the best weeks for those addicted to the insane thrill of the art world.

I miss it already - the great art, my friends, the non-sense fashion and cannot wait for next year.

["Best $2k I Ever Spent!" Miami Art Basel Weekend Party Round Up]