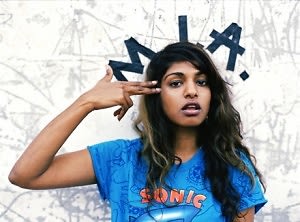 M.I.A. has been blowing our minds since bursting onto the scene with her 2005 debut , Kala. Since then she has put out a steady stream of good music and better sound bytes as an impassioned champion of issues in the Middle East and elsewhere. She has fueded with journalists for misrepresenting her in the press and handed out some scathing remarks regarding other female artists. Bottom line, she has never been one to hold her tongue. So, all of this uproar over a middle finger at this year's Super Bowl halftime show seems somewhat foolish. Bad-Asses are bad by nature.

She Made the Super Bowl Halftime Show Exciting Again 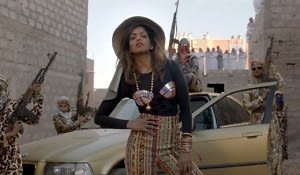 I suffered through awkward posing and sadly assisted cartwheels until M.I.A. finally showed up during the opening chant of Madonna's new single "Give Me All Your Love."

Nicki spit her verse without any major mishaps... and then the camera panned to good ol' predictably unpredictable M.I.A. and she straight up flipped the bird.

Conservatives were up in arms as the NFL and NBC were flooded with calls and emails about the "obscene" gesture claiming it was both immature and unprofessional. I call it bad ass. [Photo via]

Like Any Real Bad Girl, She Knows That Any Press if Good Press 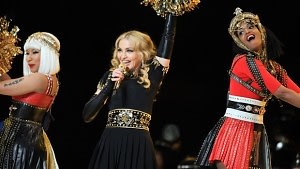 You can't expect the baddest of the bad to sit there on a stage with 100 million viewers and play second fiddle to Madonna. Ain't nothin' BAD about that.

When your new single is titled "Bad Girls", you put down those pom poms and you give Middle America the middle finger.

5 million YouTube views later, you've got a hit on your hands. [Photo via]

She's A Rebel With A Lot of Causes, And A Lot Of Money 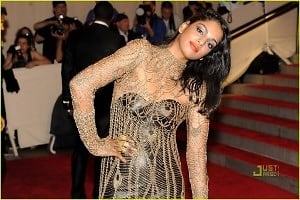 The latest news regarding the fallout from "fingergate" is that M.I.A. agreed to pay any fines enforced by the FCC against the NFL or NBC in her performance contract.

You know, because they knew her history of being bonified bad ass.

But wait, did you know this bad girl is also a Bronfman? She is engaged to Benjamin, son of billionaire Edgar Bronfman Jr., former CEO of Warner Brothers Music.  You can't stop her, you can only hope to contain her. [Photo via]