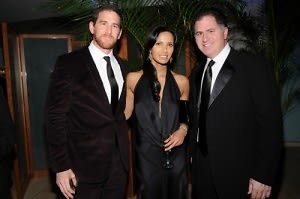 So, Padma Lakshmi and Adam Dell...what's their deal? Padma has been dating Teddy Forstmann for some time, and when Padma announced her pregnancy last fall people naturally assumed that he was the father. Padma wouldn't confirm the identity of her child, which....is a little weird, right? Like, if you've been dating someone for a long time and are now pregnant, why wouldn't you confirm that he's the Dad? And they definitely didn't break up, because according to sources Teddy was at Padma's side when she had a brief stint in the hospital recently.

So it's not like Teddy impregnated her but doesn't want anything to do with the kid, if he's so devoted as to stay by her bedside. And if the kid is his, they would just come out with it.

So, Teddy is being the Seal to Padma's Heidi Klum (in that Seal started dating Heidi when she was pregnant and raised Leni as his own.) 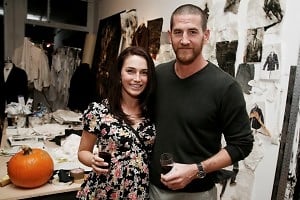 Which leads us to Adam. The two first became acquainted about 2 years ago at the South Beach Food and Wine Festival, and then again last March at the New York Junior League's Winter Ball.

It's not a torrid love affair, because otherwise Teddy wouldn't be sticking around, and Dell, who is a rich and dashing Columbia professor probably has lots volunteers to keep him warm at night. Definitely a Frenz Benz sitaution, right?

For more on Adam's Social life: