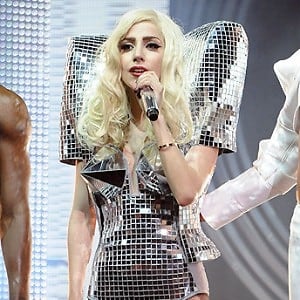 Lady Gaga has had quite the year so far. A big New Years Eve Concert at the Fountainebleu, meeting the Queen of England, a Monstar of a tour schedule, etc. Apparently the stress of it all is taking a toll on her health. Today, Gaga has collapsed due to exhaustion. What put her over the edge? We'll take Oprah for 2,000, Alex...

Tune in this afternoon to catch the heavily anticipated visit to Harpo Studios. Oprah's so excited about the show she had trouble sleeping:

We are all excited for the show today, but more importantly, we hope the Gaga is feeling better soon.

“Due to exhaustion and dehydration, Lady Gaga collapsed and passed out before her show tonight in West Lafayette, Indiana,” the singer’s publicist tells Rolling Stone. “Her physician has advised her to take a few days off to rest.” Lady Gaga’s rep didn’t specify how long she’ll be out of commission; the Purdue show has been rescheduled for January 26th.

According to her current slate of tour dates, Gaga is scheduled to appear at New Jersey’s Borgata Casino tomorrow night, January 16th. She has gigs the following two nights, in Wallingford and Uncasville, Connecticut, respectively, before she has a one-day break in her schedule. After that, she is set to play four high-profile shows at New York’s Radio City Music Hall on January 20th, 21st and 23rd and 24th. After the Manhattan shows, Gaga’s next tour date is February 18th in England, where she launches a nearly three-month international tour.

On her Twitter, Lady Gaga informed fans that she was devastated to have missed a performance. “An hour before the show, I was feeling dizzy and having trouble breathing,” she wrote, adding that paramedics diagnosed her with an irregular heartbeat as a result of exhaustion. “Can’t apologize enough for how sorry I am,” she added, explaining that her stage set has moving parts that could have proved dangerous had she passed out onstage. “I could hear my fans cheering from my dressing room, I begged everyone to let me go onstage. … I hope you can forgive me. I love my little monsters more than anything, you are everything to me.”

Lady Gaga is also booked to perform at January 31st’s Grammy Awards in Los Angeles, where she is nominated in five categories, including Song and Record of the Year (for “Poker Face”) and Album of the Year (for The Fame).