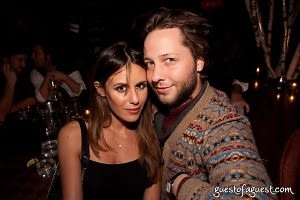 Derek Blasberg, the charming man-about-town who tweets practically his every move, has finally released his first book, Classy, a guide to ladylike behavior. A journalist from the New York Times followed Derek as he set off to a party in his honor, hosted by Lauren Santo Domingo. Here's your sneak peek into the fabulous life of a self-made It Boy (...but don't dare call him that!)-

Clad in Burberry, Derek (infamous for his quirky style) busily types away on his BlackBerry while sitting between Leigh Lezark and Geordon Nicol. The reporter, Eric Wilson, smirks as he listens to this surreal exchange:

“Yes, yes,” Mr. Blasberg says, excited, though his plans are not set. “Are they making you work?”

Blasberg is referring to Lezark's lush career as a DJ with The Misshapes - will she be spinning the tunes or is she among the guests (like Derek) who will be flown to the French Riviera courtesy of the haute couture label?

Essentially, Blasberg's job is to mingle with the beautiful people and report on the latest in the scene for Style.com, as well as V Magazine, Harper's Bazaar and Interview. Derek is so sought after for one reason: he's nice.

Niceness is something that is far too rare in the industry, but it's what Derek does best. After a rocky stint at Vogue ten years ago, he made it his goal to steer clear of scandal while still seeing it all.

“I don’t lie. I just try to find what was positive and only speak about that.”

That quality has made it easy for Derek to quickly ascend the social ladder and become just as intriguing as the people he reports about.

Back to the party. The dinner, held at Vogue's Lauren Santo Domingo's apartment in Chelsea, is attended by a slew of designers, models and socialites. Rachel Roy, Chris Benz, Jessica Stam, Byrdie Bell, Claire Bernard, Marjorie Gubelmann and former first daughter Barbara Bush all make the trek downtown. Also in attendance: the Proenza Schouler boys, who were part of Derek's scandal that led to him leaving Vogue.

While he mingles and schmoozes with the well-dressed elite, Derek is adamant about one thing: he worked hard to get where he is. He doesn't appreciate the classification of It Boy (even though his geek-chic style was the inspiration for the Gossip Girl boys' styles). He wants to be known as a respected journalist with moral integrity, not a stage five clinger with social climbing savvy. Duly noted.

“I feel like I have been portrayed as if I was standing outside Cipriani hoping someone picks me as their plus-one,” he said.

Through this NY Times article, we have learned a lot about Derek Blasberg: he's a major gossip, he has a salacious past, he's not going to apologize for his extravagant lifestyle... and, after all of that, he is still charming and likable. There's no solid explanation for this, but it's undeniable. Derek is a witty teddy-bear. And classy, of course.