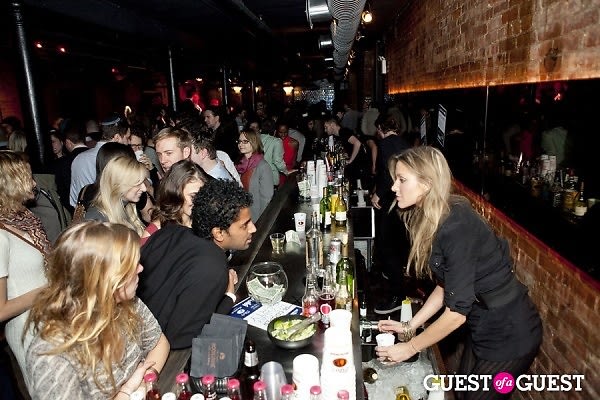 Go HERE for more photos by Mark Iantosca, and tag yourself and your friends!

Okay what happened last night? No really, the boys (and girls) over at 36 Cooper (Foursquare, Curbed media, Hard Candy Shell), went and got groovy. Not that Lockhart Steele's paisley shirt get ups were ever non-groovy, it's just this time there was no irony involved. The holiday party hosted by the new media companies in an old media building (the Village Voice), secured their standing as the hottest workplace in Manhattan. I mean....it was held in the basement of CBGB-an underground space with an alleyway (extra place) as it entrance point!

So, while the fancy people were opening Diptyque candles from their company sponsored secret santa's upstairs at DBGB, there was a whole lot of drunk, playful new media types cutting loose at an open bar downstairs.

Forget Socialites. Social Mediaites are at the new people to pine after. And the new dream? Let's just say it has a lot less to do with moving from the midwest to Manhattan for a chance to schlep uptown in stilettos to fetch coffee for a Conde Nast editor. The new "it" job is clearly a chance to manage Dennis Crowley/Lockhart Steele/Kevin Kearney and co.'s facebook fan pages. That and carry around the Naveen Selvadurai cutout: 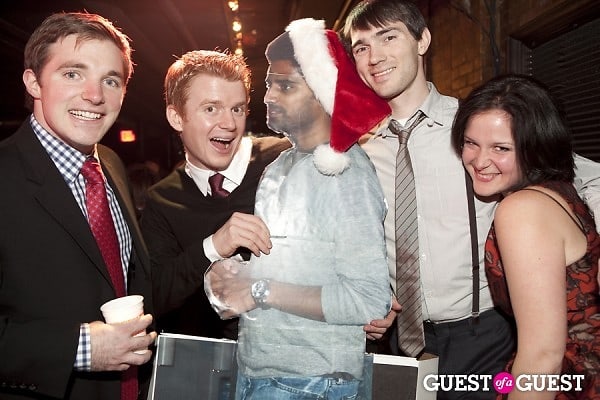 Below, the real Naveen orders a drink from the open bar run by incredibly attractive bartenders:

Did the after party for "True Grit" at the Four Seasons last night have these girls? I doooon'tttt thiiiiink so!

The dance floor competition was heavy: 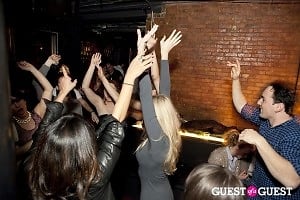 With all of the sweaty LES/CBGB action going on, it was nice that these two (Sarah Kunst and Dennis Crowley) decided to step it up a bit. The chic black suit and long red gown stood out in a sea of muted greys. GLAM! 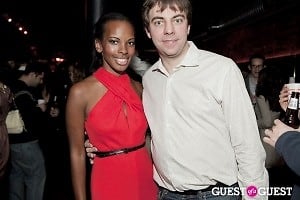 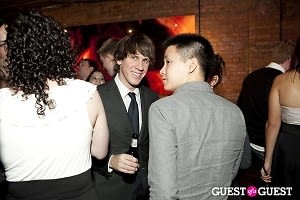 Sidenote. There are four people that you should meet and get to know if you are hoping to break out into this new media club in NYC. They are as follows: Lockhart Steele, Elizabeth Spiers, John Carney, and Peter Feld. I had this great idea last night to do a post titled "the 6 degrees of Peter Feld" but I'm afraid it would take me too long. Anyway, they were all present last night which is somewhat like having all four Beatles show up to dinner. Okay not really at all but you get the point. Clarification.

Rachel Sklar was there!? How did I miss this sharpshooter? 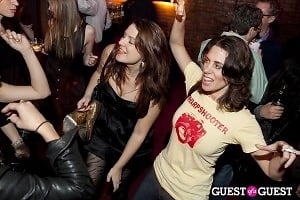 Also, apparently Nick Denton was there but I managed to miss him too. He was on special assignment: handing out passwords for entrance at the door.

Okay, it is very tough to pose behind a DJ booth with guys who have giant padded headphones and neon sunglasses and NOT look like douches. Kevin Kearney and Dennis Crowley somehow achieve the impossible and manage to not only NOT look like Dbags, but look hip, relaxed and cool. 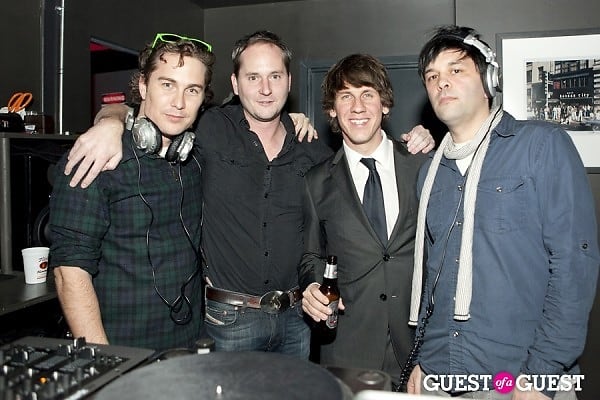 Anyway. Last night's party was the kind of party I imagined went on in New York City that I just had to move here for. And for a moment there, I even felt like I was back in college and the only worry I had the next morning was waking up for my chem lab. New York is special like that, and it is having a groovy moment with the characters making up this groovy crew.

And today, I had to wake up to reality and "check in" to work. The worry load is a bit heavier, but it's so much better than chem lab.

p.s. Speaking of feeling collegiate. On the way home we stopped by a NYU student's dorm. The girl was busy studying for her finals and she seemed to be happy for a break, albeit an annoying one. She's responsible for finding a random iPhone in the back of a cab and securing it to it's rightful owner (me). She's a psych major, she has a big test today, and I think she is going to ace it because of me. (Seriously, the karma she got from this?!) I hope she interns for us.