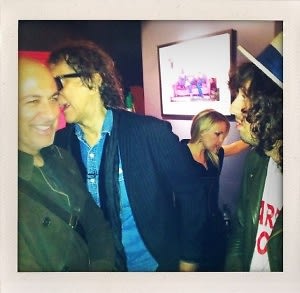 Walking into the Morrison Hotel Gallery last night was like entering a time capsule to another decade with older gentleman sporting long hair, long beards, leather jackets, and ladies in bell bottoms all out to fete the man who shot the '70's, Mick Rock, and his new exhibit Exposed. Liv Tyler's mother Bebe Buell, the woman Almost Famous' Penny Lane is based on, was in attendance as well as the Strokes' Albert Hammond Jr. and oddly, Jimmy Fallon who we spotted goofing off with his arm around the iconic photographer's shoulder. Alexandra Richards, Ally Hillfiger, Becka Diamond, Charlotte Ronson, Evan Dando, and Nur Khan also came by to take a look at the images, which included more well-known shots amongst previously unseen photos. 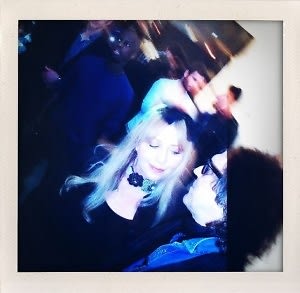 The legendary photos of David Bowie, Iggy Pop, Syd Barrett, Lou Reed, Queen, Bono and other rock and roll gods didn't hold the crowds attention for long. While the gallery event, sponsored by Creem Magazine and flowing with Russian Standard Vodka was busy, it was in no way as packed as the street outside, where scenesters dressed in head to combat boot black clamored to get their way into the after-party held next door at John Varvatos.

The crowd didn't even break their elbowing to try and congratulate or even catch a glimpse of Mick when he exited the gallery and then walked to his car to put the flowers he had received in the backseat. When he went to enter the old CBGBs, bouncers actually had to part the crowd for him, instead of it self-splitting as is customary when a celebrity makes their way towards the velvet ropes.

Once inside though, Mick had admirers gathered around as he took the stage to do what I assume was thank guests for coming and introduce the bands. Having left my noise filter at home along with my British icon who mumbles decoder ring, the only recognizable words I could make out without the aid of subtitles was "Thank you," and "fuck." 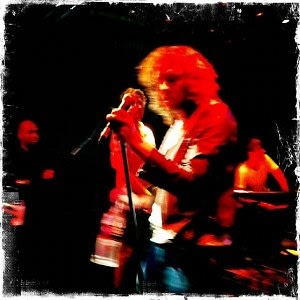 Model Jamie Burke then played a loud, noisy set followed by a performance by Adam Green for a crowd which at this point included a number of downtown musicians such as  Mia Moretti, Caitlin Moe, Catherine Peirce from the Pierces, Reni Lane and Billy Cadden from The Postelles. Jimmy Webb, manager of the East Village punk store Trash and Vaudeville was also on hand, as was designer Prince Peter, who teamed up with Mick last year to produce limited edition screen print tee shirts.  He was nice enough to answer our fashion questions such as 'What is the biggest trend for Fall?", "What is worth splurging on?" "Is there a must have for New Yorkers, specifically?" with every answer being "Black," and "leather jacket."