Take artist Marco Brambilla's popular 3D video installation, Civilization, a reinterpretation of Dante's Divine Comedy, and add one of the most famous churches downtown. What you get is a eerily fit setting to watch, mingle, and discuss the Flash:Light initiative of Nuit Blanche New York. Then add in a midnight organ program with opera, organ music, and monks in hoodies...and, well this isn't your typical visit to St. Patrick's Basilica in Nolita. Did we mention Chelsea Handler and Andre Balazs were some of the fellow parishioners this Saturday night? Since when did going to church become so cool? Guests at "Civilization" on Saturday included Andre Balazs and Chelsea Handler, Jay Jopling, Lisa Phillips, Anton Kern, Marina Abramovic, Zani Gugelmann, Andrew Kreps, Joel Mesler. 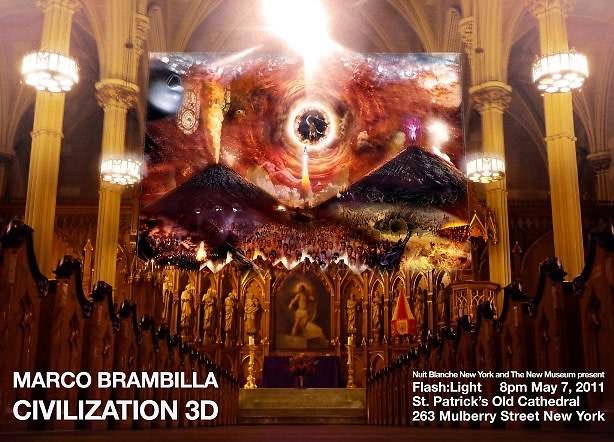 An initiative of Nuit Blanche New York, Flash:Light is a featured project of the New Museum’s Festival of Ideas for the New City, a bold initiative for artists, architects, technologists, designers and other thought leaders to exchange ideas, propose solutions and invite the public to participate in improving urban life.

Nuit Blanche New York is producing Flash:Light and joins other Festival partners including: The Cooper Union, New York University, Columbia University, The Bowery Poetry Club, The Architectural League, and the Storefront for Art and Architecture.

You may recognize Civilization from seeing it in the elevators on the way up to the Boom Boom Room at the Standard Hotel. For more about this 3D installation, and more of Marco Brambilla (who is featured in this month's Vanity Fair) 's work, go here: marcobrambilla.com