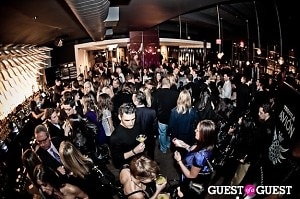 Go HERE for more photos by Josh Wong, and tag yourself and your friends!

Last night Gotham magazine and Frederique Constant celebrated the Men's Issue at STK. It was a rare party with more men in the room, many of whom were single, straight, and deemed one of the city's most eligable by the issue's 100 Bachelors list.-

"Choosing the 100 bachelors depends on a variable of things," Jason Binn, CEO of Niche media told us. "They could be individuals that go out a lot and are always seen at the right places with the right people. It could be people who take their life very seriously personally and professionally. Sometimes it's people who aren't really out that much but are really great people that people should know."

GuestofaGuest's Publisher Cameron Winklevoss was deemed one of the Chosen Ones for this year's list.

"He's a blend of everything. He touches all three of those points," continues Jason. 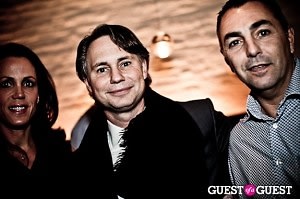 As if the available studs peppering the ground level and upstairs "VIP" (They had gift bags and watches for sale by Frederique Constant, but no separate list) weren't eye candy enough, male models stood on platforms throughout the room showing off clothes and their other assets. While it's not clear whether or not they are intelligent, humorous, kind, or any other characteristics women find appealing, they proved they have incredible endurance by standing relatively still for a good three hours.

Jon Hamm, who dons this month's cover, was sadly missed during the event, though there were no hard feelings. Chosen for his style and sensibility, he is also easy to photograph.

"He doesn't take a bad picture. He didn't need any air brushing. I was very happy to know that we weren't going to get a big airbrushing bill. Sometimes it takes many, many hours. He's one guy who when he wakes up in the morning, he doesn't have any issues."

There you have it. If you learn one thing today: Jon Hamm is hot.