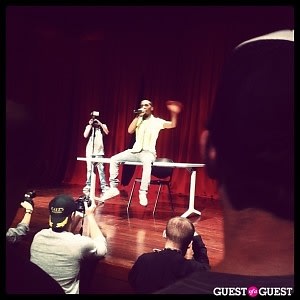 When Lil B announced he was coming to NYU to give a very "rare," and "history-making" speech, the interent went completely viral. Lil B is quite frankly not the best rapper in the game, but he pioneered a lot of firsts in hip-hop, especially as an unsigned artist. From writing a book at 19 to inventing the famous "cooking" dance, Lil B is a true internet sensation.

What could he possibly be talking about that is so life changing? After sitting through his hour and a half long speech, I think I may be more confused than I was before, yet enlightened. He began his speech saying, "no body was asked to be born." Honestly, there were whispers in the crowd that he was coming out. I mean he was wearing a flower-printed scarf and sparkling bindi. Nevertheless, his speech was inspiring, covering basically all of the public service announcements you could think of. He talked about being wholesome, gave a few shout outs to Drake, Jay-Z, and Birdman, and just talked about how important life is and how much it inspires him. He wanted to come to NYU to simply share his excitement for life. Wanting everyone to be "based," meaning humble and caring, he just wants people to be nice to each other, pay their taxes, and to wear their seat belts.

After his speech, students rushed the stage, taking pictures, getting autographs of everything including cooking utensils, macbooks, and wallets. It was extremely impressive that he stuck around to meet everyone, yes everyone in the crowd. I even got to shake a hand! The NYU administration was adamant about keeping his distance from the student, but his basedness wanted to stay with his fans.

Check out some highlights from the speech below:

"you can tell your hand to move. *moves arm* and it moves! That's amazing to me" #NYULILB #nyu

And he's talking about bugs now. "when I go outside, I study the bugs." #NYULILB

"Things I think about on the daily? Safety. Wear your seat belts" #wordsbybasedgod #NYULILB

"I looked up what black means online and I it said something like coal. I don't look like coal!" #blackmanproblems #NYULILB