Halloween may be over, but that doesn't hold true for those attending Lebowski Fest at Brooklyn Bowl.  Fans of the ever-classic 1998 Cohen brothers movie came out as their best Walters, Jesus, toes, castrating nihilists and marmots. The Dude must abide, man.- Lebowski Fest began in Louisville, Kentucky when founders Scott and Will ((aka "the Founding Dudes," according to their web site) began quoting lines from the film while bored at a tattoo expo.  Others join in creating an instant sense of friendship and the Fest was born. Since 2002 the event has grown and expanded to not only NYC, but also Seattle, Las Vegas, Austin, Los Angeles, Chicago, London and Edinburgh. 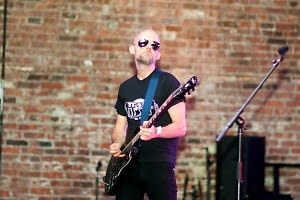 Last night's activities included trivia, a screening of the flick, a reading of "Two Gentlemen of Lebowski" by Adam Bertocci, drinking of way too many White Russians and lots of saying 'Shut the fuck up, Donny." There was no one holding back due to Shomer Shabbos as Urban Achievers took to the lanes to get in the mood and show .

Moby, an unlikely Lebowski fan, was on hand to perform with his band Diamondsnake minus a themed costume. After, the Award for Best Costume was given and  The Best Dude, Best Walter, Best Jesus & Best Maude took to the lanes for a Roll Off.

For those who weren't aware of the event, they were definitely in for a surprise. As @ArielleLisa put it "Didn't get the memo that there was a Lebowski fest going on at brooklyn bowl. That explains all the bath robes."