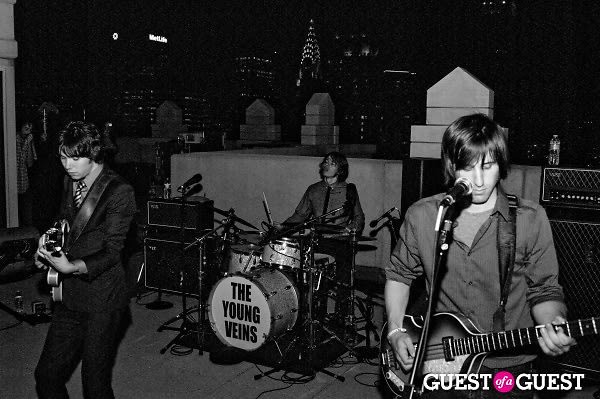 Go HERE for more photos by Donald Lee and tag yourself and your friends!

The sky was definitely the limit for The Young Veins on Tuesday evening! The up and coming band held a rooftop concert on the roof of Atlas New York as part of Gotham's fourth annual Open A.I.R. (Artists In Residence) concert series. -

As the sun set, the guests were able to view a breath taking sight of Manhattan and of course (what else) take more pictures.  Once darkness began to fall the party was just getting started.

The band is comprised of two former members of Panic! at the Disco(Ryan Ross and Jon Walker) and three other, more anonymous, members who round out the quintet (bassist Andy Soukal, drummer Nick Murray and keyboardist Nick White). The Young Veins have started out their music career in a peculiar way.  Usually new musicians start out making music for the indie world and then later move on to the major label deals and MTV exposure.  Panic! at the Disco, already was once a featured MTV band, which makes The Young Veins have reversed this path to musical stardom.

Crowds listened to the uniformly short pop pieces in garage rock mode, swaying and sipping their drinks to the beat.  Can it get any better this this... great music with and amazing view??!