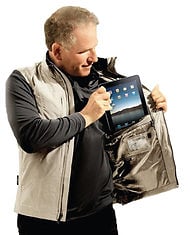 Jennifer 8. Lee published an article over at The New York Times about a dilemma tech-savvy men face: how to carry around their iPads. She investigates the problem and offers solutions that are least compromising to virility.

The problem hinges around the fact that men do not want their iPad tote mistaken for a murse. Lee mentions CNET's Scott Stein, who has a "humiliation index" for bags--with the Cocoon Harlem Netbook/iPad Sling scoring poorly and the the "scout extra small laptop shoulder bag" from STM getting good marks.

But I wonder why men cannot just carry the device in a larger bag--a brief case, say--that protects the iPad and preempts any question about the feminine implications of a mini-sized tote. Apparently, Occam's razor is lost on tech-savvy guys or journalists puffing up a story.

The dilemma gets so dire that, in a  compensatory move, some men go to the other extreme.

"One strategy, touted on online forums, is to turn to macho surplus military gear. That advice led Foo Conner, a 25-year-old consultant from Pittsburgh, to buy a World War II-era Swiss ammunition case to carry around his iPad. “It had to be more masculine,” said Mr. Conner, who added that the bag is now nearly sold out online. Another popular choice: military map pouches. The pre-GPS-era bags are perfectly sized for a tablet device."

But there's not necessarily any reason to go all G.I. Joe in transit with your iPad.

Apparently David Hockney, the British artist,  just carries his iPad in a custom pocket his tailor sewed into his blazers.

Can we all just agree to buy bigger bags?