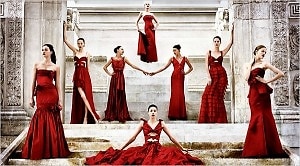 Valentino Garavani may have retired, but he still manages to stay above the curve. On December 5, he and longtime partner, Giancario Giametti, are launching the Valentino Garavani Virtual Museum, a downloadable desktop application that archives 50 years of Valentino’s legacy.

This archive will contain over 300 of Valentino’s timeless dresses, sketches, illustrations, advertisement campaigns, editorials and photographs of significant events and red carpet moments. Pieces that are featured include: Elizabeth Taylor’s 1961 haute couture dress she wore to the Roman premier of Spartacus, Jacqueline Kennedy’s 1968 couture wedding dress for her marriage to Aristotle Onassis, and Julia Roberts 1992 haute couture gown she wore to receive her Academy Award in 2001. If this museum were to actually be built, it would cover over 100,000 square feet!

When speaking about the project, Valentino says,

“I see it as part of my legacy... I am happy that thousands of students, young designers and fashion people will be able to see and study my work in every aspect of it, and in a manner easy and accessible for the younger generations. But it is also important to remember things of the past, to review the fashion that has shaped our lives. I would call it ‘Future Memory.’”

In congruence with their trend of using multi-media, Valentino Garavani and Giancarlo Giammetti are announcing the launch of the virtual museum via a press conference live-streamed from YouTube in New York. A preview can be viewed on Women’s Wear Daily website.