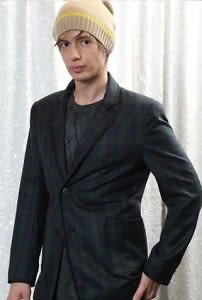 Mr. Powers has style, he has grace…and now he has a clothing line in his own honor. Bill Powers is an onscreen judge for Bravo’s ‘Work of Art’ television show, but he also happens to be married to fashion designer Cynthia Rowley. And when that is the case -  more often than not – when people see him, he is well dressed to the point where people take notice. That is what spawned the idea for Cynthia’s new menswear label, Mr. Powers.

"[Bill] wore stuff last season but we were unprepared for the demand it created. This collection is specifically tied to what he wears on the show."

The Mr. Powers collection is “bespoke meets bedraggled” Cynthia says, and focuses on tops and accessories. There are 24 pieces, which range from crocheted sweaters and striped cardigans to a plaid blazer and tweed sport coat – all meant to be worn with jeans. And as far as the bottom half, well:

"I guess one day it would be nice to do pants," Rowley said.