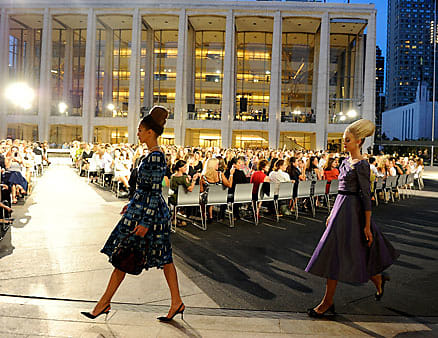 After a successful (and crowded) Fashion's Night Out, New York Fashion Week has officially started! This season the hype is bigger than ever with previews of designer trends and celebrity appearances blowing up the media. High profile debuts, major comebacks, and new initiatives are making this fashion week one of the most talked about seasons. Here's everything you need to know to keep up over the next week!

Venues: The Theatre, Stage, Studio and Box at Lincoln Center will be the center of Mercedes-Benz Fashion Week in New York, where more than 80 runway shows will take place. Outside venues include the Grand Promenade at Avery Fisher Hall and the New York Public Library at Lincoln Center.

Read: If you like more coverage than 140-characters can provide, check out some of the sites that will be doing the most comprehensive coverage of the shows and parties.

-WWD -The Cut -Style.Com -On The Runway, NYT

Watch Live: The Style Network will provide extensive cable coverage including an exclusive telecast of the 2012 Style Awards, daily updates live from fashion week, and special interviews with designers. The network will also stream live on their website, myStyle.com. In addition to streaming from The Style Network, over 30 shows will stream live on YouTube. You can click HERE to watch the shows streaming on YouTube from your phone, where you'll also have the option to look at the schedule and add shows to your iCal or Google calendar.

Comebacks:Though according to the Daily Beast, former French Vogue editor Carine Roitfeld's new magazine launch isn't really a comeback, fashion insiders have been anticipating the launch of CR for months. With the official launch party set to take place tomorrow evening at The Frick, the debut of CR may be the first real competition Vogue has ever had. Read more about CR and check out the Daily Beast's interview with Carine Roitfeld HERE.

Other News: Ralph Rucci, who skipped out on last season's fashion week citing financial problems, will return to the tents on September 9th. Betsey Johnson is back with a new dress collection in collaboration with the Levy Group after filling for bankruptcy back in April.

Activities: If you're not headed to any shows this season, don't worry, there's still plenty to do outside of the tents. Check out our guide HERE for events outside of Lincoln Center!