[Front row at Marc Jacobs. Photo by BILLY FARRELL for PMc] With what seems like hundreds of shows it's hard to tell who the big players in town are. And it's true - it does change a lot on a day to day basis. But to make sure you get the best coverage of the biggest names, we're going to help you out a bit - because we don't want you to be the last to know when everyone is gabbing around the water cooler about who took who's front row seat, now do we?... 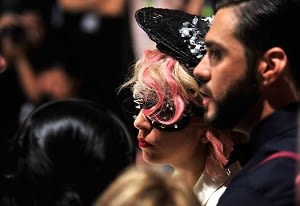 Marc Jacobs knows how to pack a house. And a hallway. And a street. And a... well you get the drift. And while everyone went gaga over his fitted army jacket and ruffled mini skirt (we're sure that included Lady Gaga herself, who was in fact in the audience), there were pieces that fell flat. But his show, as always, which includes "front row only", (besides standing room) was a hit success. And how could it not be? He is after-all, the Marc Jacobs. But if you're more in it for the celebs than the clothes, here's what you're looking for: Madonna, Jesus, Perez Hilton they were all there, and Marc even had Karlie Kloss and Jessica Stam strutting their stuff.

Oscar de la Renta was up to his old tricks again of being absolutely... breathtaking. Period. Sheer, flowing fabrics, with lace everywhere, long gowns, and brocade, and not to mention another collection that found an excuse (and occasion) for feathers. And the models were rocking some serious braids. If going to Oscar to see Oscar wasn't good enough for you, it's the one show where you could see Zac Posen... in the audience. He was personally invited by the designer, and sat front row. True story. One more reason to make the trek to the Upper East Side for the show. [Photo by JP PULLOS for PMc] 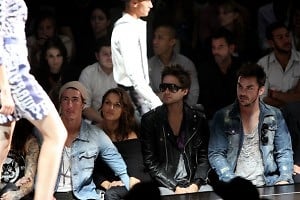 G-Star wowed the celeb-filled crowd as models broke ground from five moving cylinders. Intense ground pumping music throbbed as the models strutted down the runways in the NY Raw Collection, finalizing with David Bowie's 'Rebel Rebel". The only thing, perhaps more than the out-of-this world runway show that was expected from G-Star, was the star-studded Hammerstein Ballroom, where the production was held. But fashion fans were disappointed in the arrangements, as people like Lorenzo Martone, Marc Jacobs fiance, was moved for Jared Leto. That's Fashion Blasphemy right there.

Even if her show was at 9AM, looks like we weren't the only people who braved it - Anna Wintour also made an appearance, along with Toni Braxton and a rather large crowd, to check out not only Tory's famous accessories but her large line of killer jackets and awesome spring dresses and other gear. Seems like the designer knows what she's doing to have such a cult following. [Photos via Getty] 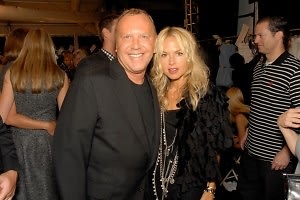 We heard the word that Michael Kors showed a lot of architectural designs and some krinkely short suits (our fave!), inspired by some Calvin Klein of an earlier year. Sounds good to us, especially since he had Karlie Kloss and Chanel Iman walking in the show, and the likes of Michael Douglas, Katie Lee Joel, Rachel Zoe, Simon Doonan, and of course Anna Wintour watching from the sidelines. ----------------

[Photos by MARK DIMOV for PMc]