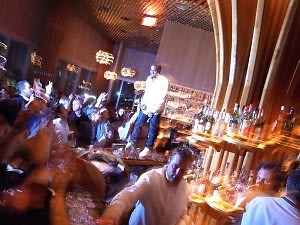 It's 1:50 pm on Friday, September 17th and we're calling it: Kanye West had the best Fashion Week ever. Take a look at his last few days...-

Mr.West started things out with a bang by surprising everyone with a performance at the re-opening of the Boom Boom Room last Thursday night.

The next day, Mr. West was front row and center at the Phillip Lim Men's Spring 2011 Fashion show.

Saturday he took a break from FW to fly across the country for the VMAs, where he debuted a new song and made quite the comeback after the Taylor Swift debacle of last year.

Tuesday, he was back in New York for the RODARTE show, and that night he was a guest performer in pal Jay-Z's Yankee Stadium Concert.. The next day, he sat next to Kelly Osbourne at the Jeremy Scott Show (in a bright red blazer), before hitting up the Phillip Lim Womens Collection, sitting next to Rashida Jones. That night, he donned a tux to hang out with Jay-Z at the GQ, Rocawear Party.

Kanye finished the week off by attending the L'Wren Scott and Mick Jagger Fashion Week dinner party at The Lambs Club, after which he chilled with Gwen Stefani and Mr.Brainwash at the L.A.M.B afterparty.