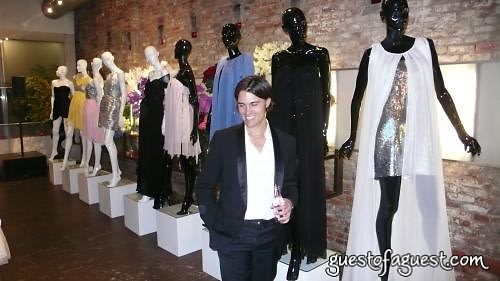 [Keith Lissner amongst his designs]

Designer Keith Lissner’s Presentation to reveal his Spring/Summer 2009 collection gave me an idea. If I were a lady of distinction on the brink of taking a fabulous trip around the world to the best cities, I’d just pull out my Louis Vuitton trunks and start by packing some of my favorite gals – Bilee, Cadence, Ainsley, Drake, Devorah, Haeven & Rachelle. These gals, who have fabulous names, are not actually the grand dames of which you are thinking. They happen to be dresses. And for my sojourn around the world, I’d take all 20.

I was able to get a preview of this fabulous new Keith Lissner collection for S/S 09 at Banchet Flowers in the Meatpacking on Wednesday evening. This beautiful minimalist florist shop, a favorite among many downtown denizens, played host to preview some chill creating frocks, dresses and gowns. These dresses, I feel, could go anywhere on the globe and create a scene.

I’m a huge fan of Keith’s designs as they always personify grace and elegance on the woman who wears them, but it WILL be this collection that solidifies him among a group of coveted designers who names regularly fall off the tongues of passport carrying international starlets/socials/fashionophiles. As I took the dresses in around the flower shop, I got that chill that you feel only when you’ve connected with a vibe that also exists in the universe at the same moment. That feeling, that synergistic moment, told me one thing: He’s made it! This is THE collection.

As I perused the looks, my journey began.

I started Cheri, Cadence and Chelcee (these three gals are my favorites). They are these wonderfully light and airy silk georgette dresses with crystal beading and chiffon in warm white, yellow and blue. They carried me off to some hot nights in Majorca, strolling the streets while under the influence of intense romance that is reminiscent of classic movies.

Eda, the strapless sequin dress with chiffon overlay took me to Paris to a fun night at the cabaret. Those really fun cabarets where the audience is up and dancing by the end.

Then there was Devorah. Two of her! One in black and one in metallic silver, these pleated silk mini strapless numbers are New York and Hollywood glamour welded into one. These dresses are worthy enough to be named Devorah, as they were inspired by beautiful temptress herself, Devorah Rose.

Brenha was faint worthy – a full pearl dress that even Mikimoto would envy. She belongs in whatever city she wants.

In Short: Asking Keith what the inspiration for the line was, it wasn’t travel at all. Appropriately, it was the Royal Ballet and 70s Punk Icon Sue Catwoman. That’s what I love about Keith – he can mix and intertwine two distinct worlds/periods/ideals and create breathtaking harmony into one collection. A wearable collection that works for just about any occasion in any city!

I cannot wait to see this collection out and about and WHO will be wearing it. 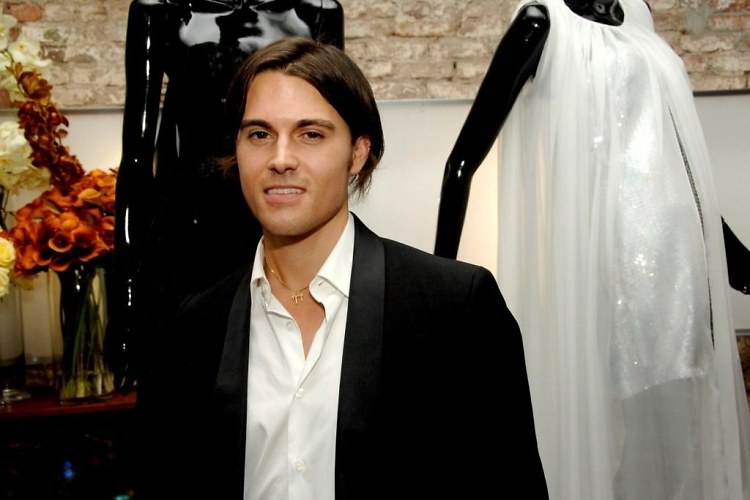 Background on Keith: I instantly liked Keith Lissner when I met him. I met him on a street corner via a mutual friend a couple years ago. He was in sweats and drinking a smoothie having come straight from the gym. I didn’t know anything about him, but he had an heir about him that left me intrigued. The next time I saw him, a couple weeks later, was on his birthday at Jeffrey Fashion Cares at Milk Studios. While his friend secured front row seats for the show, Keith and I milled around and looked at the auction items which were mostly bags and designer clothing. Keith’s insight into fashion, accessorizing and design concepts was unparalleled. I could really shop with this boy. That’s when he told me he was a designer. The light bulb went on and it all made sense. This handsome boy who’s really stylish has talent to match.

Before I confirmed in my mind that he was really a designer (because a lot of people call themselves designers who can’t or DON’T really design), I needed to see his designs. Probably a month or two later, after a dinner of Indian Cuisine, Keith brought me to his Design Studio to show me his Spring 08 collection.

In a word, I was inspired. I’m not just saying this because Keith has become a good friend of mine, but his interpretation of life as it should be though fashionable designs is a concurrence of several divides. Old world, new world, and a world imagined but not yet discovered.

As he showed me each piece off the racks, it was a celestial moment. The dresses evoked visions of elegant women parading around in various forms of life: Art, Fashion and Social. A woman who wants to add a little glamour to her life could wear one of these looks, I thought. I noticed his designs didn’t alienate any age group. When Bazaar does their At Any Age layout, a Keith Lissner could be featured in any of the categories ranging from 20s to 70+.

He creates timeless silhouettes in exotic fabrics and rich colors, sometimes with an edge; for example, stingray as an accent or meticulous beading, bows. This nice down to earth guy with a keen eye had visions of fashion that were magical and light-years ahead of his peers.

When he first showed me the proofs for his Fall ’08 Look Book, there was this one shot of a model in a deep wine red gown and it moved me. The gown, the setting and the girl’s expression told me of a story I had yet to be told. I muttered the words “Fallen Angel” out loud. As if the secret was already imparted that Keith was about to tell, he looked at me and said, “That’s what this is supposed to be.” The inspiration for the collection was Icarus after the fall – you know, in Greek Mythology, when Icarus tries to escape Crete, he flew too close to the sun and his wings burned off and he fell to his death. The picture was supposed to inspire ‘after the fall’, and it did.

This is all the craft of a guy who I’ve gotten to know very well since first meeting him two years ago. In that time, I have seen his talent expand, his following and popularity grow and each collection is even better than the next. I have come to understand why. Keith forgot his biography about Vogue’s Diana Vreeland at my family’s beach house during a weekend unwinding visit to take a break from the amount of work that was required to launch his s/s 09 collection. By the time I tried to return the book to him a week later, he had moved on to a book about famed socialite Marchesa Casatti. These are his mentors, muses and inspirations. Keith is a treasure trove of talent, a warm and deep individual who’s fashion inspiration is a source worthy of celebration.