Go Here for more pictures from this event by Gina Sachi Cody.

The Fader Magazine, The Barterhouse, and Anonymous Gallery hosted the Spring/Summer '09 menswear showing of Kesh last Friday night with the help of tunes by the funk-tastic duo Chromeo along with Marcus Udagawa. Both as a designer and a DJ, KESH, straight from the UK, began constructing clothing in her early teens. Her unique designs eventually inspired a following by some of the music industries superstars including Mariah Carey, Kanye West, Lupe Fiasco, Big Daddy Kane, and DJ A-Trak. 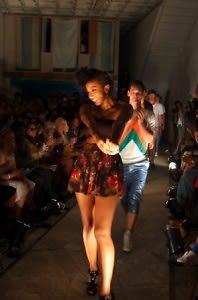 Upcoming projects include a clothing collaboration with Chromeo to be sold at Urban Outfitters, and an upcoming t-shirt collection for Dovers Street Market. From being featured in Vogue to being handpicked by the MAN fashion panel to show a full collection at London Fashion Week last season, Kesh's creative genius continues to be celebrated. Her music career follows much of the same success, with Kesh spinning at some of the most prestigious venues worldwide. Basically, this multi-talented designer stands above and beyond the rest and who knows what else she will prove capable of in the future.

Here was our photographer Gina Cody's take on the show:

"I arrived at the fashion show at Anonymous Gallery while the rain was pouring outside, but the party still alive inside! Immediatly upon entering I recieved good vibes. The music was pumping and the wine was flowing and the guest seemed to be enjoying the environment- not a HUGE venue but a small private gallery that had a runway created with a walkway of lights and chairs surrounding it, DJ at the end. The show was "Hip hop hispter-esque style" sweet and short-  just what I have expected from Kesh. Her designs, fun flirty, yet still had an air of prep.

I met Kesh downstairs after the show and she was friendly, fun, and happy and extremely friendly. She wore what seemed to be a bra top and a above waist-top skirt which looked adorable. Downstairs her new- (just from a day priar) boyfriend, Doug, brought her champagne and the REAL party started then. After about a half hour, Doug announced to move the party to Happy Hour. At Happy Hour, everyone unwinded with a bottle at the table in the corner and the DJs kept spinning. The whole vibe was definitly "Kesh", everyone was dressed in funky outfits, some a little crazy but fun nonetheless.

The after party was a great end to her show, and Kesh partyed the night away as well as kept her composure as she was jettsetting to London the next morning. All in all, this DJ/fashion designer knows how to put a show toegether and keep her friends and guest comfortable. It was a great night with great sites, and led me to believe the name Kesh should be a verb to describe a whole aura and lifestyle she has created."