[Lorenzo Martone and Olivia Palermo at the Carlos Miele show. Photo by PMc] We're tired, aren't you? How about you, Liv and Lorenzo? Running back and forth from the tents, the Metropolitain Pavilion, Milk Studios, and wherever else these crazy designers are holding their shows. It really seems impossible to keep up with them all (let alone pronounce all their names correctly). So just in case you missed out, here's a little round-up of Rebecca Minkoff, Chris Benz, and Carlos Miele, who all showed their gear to the good people of New York Fashion Week the past couple days.

It was a big day for Rebecca Minkoff, as it wasn't just her bags coming down the runway at the Metropolitan Pavilion, but her first complete ready-to-wear collection. A surprising influence to Minkoff's designs were Tim Burton's early films apparently, but the mix of prints between the hot pink and red floral patterns and the leopard, along with the leather had us thinking more "early 90s LA" than "Nightmare Before Christmas". Bravo to Minkoff though, as we love nothing more than a good pairing of patterns together. Definite pieces in the collection stood out as more wearble than others - a leather pleated skirt, some rather simple but still fun corset tops. But unless you look like a supermodel (and maybe even still then), we'd probably advise against the two piece floral matching cardigan and skirt combo. Unless you're being a secretary for Halloween.

Oh, Chriz Benz, how we wish your show had been on Friday. You know, the day when just about every editor, fashionista, and show-goer in the world was cold, wet and dreary from the rain and the weather? Because it was like an energy drink on a platform to see the designs that came out of Drive-In Studios. We're not talking your typical box of Crayola colors here. We're talking the brightest pastels imaginable. There were feathers and there were sashes and oh, there were sequins. Who wants to wear some rainbow Chris Benz feathers and sequins for New Year's? Because I know my hand will be the first one in the air... 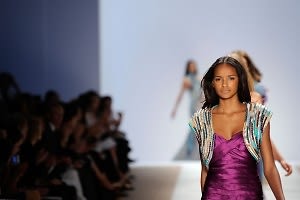 Maybe it's because I'm already planning my next vacation, or maybe it's because the music they were playing at the Carlos Miele sounded like something straight out of South America (but obviously- much cooler), but Carlos Miele had the I-need-a-vacation look down to a tee. The hot pink dress with multi-colored jacket had me wanting to dance through some hot-weathered streets, and made me wonder why I was so happy in my suede boots. And even while we haven't quite decided our feelings on "denim hot pants", we did love his usage of sheer fabrics. We just need to get ourselves a good camisole for underneath all those slinky tops. And find a vacation spot that'll work with all those floor length, sexy gowns.