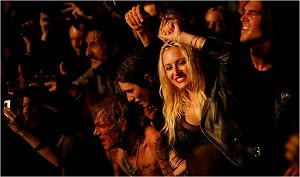 No less an authority than the Times' Guy Trebay has declared that this Fashion Week, New York got its groove back. That's quite a reversal, and not just from the city's decade-long doldrums, but from last week, when Trebay panned Fashion's Night Out. What inspired his change of heart?

Before we get to the source of Trebay's conversion (hint: it has something to do with a SoHo rock club's  reincarnation), lets' revel in his gloriously acerbic take on last Friday's Fashion's Night Out, which in just two years has ingrained itself as the Opening Ceremoniesof Fashion Week, with canapes and $1,000 shoes replacing the Olympic flame.

Some highlights from Trebay's take on the evening's lows, from the crowd:

"...an army of those occupationally glamorous New Yorkers who mobilize in an instant at the prospect of a potato chip topped with a pinprick of caviar."

"...the generic ambient mix created for the party by D.J. Alexa Chung."

To the unfortunate commercialization of renegade art that served as a party game at the Chanel SoHo store:

"...guests were invited to 'spray' graffiti from cans fitted with sensor beams. If you happen to have lived in New York in the days when graffiti pioneers...risked jail and worse to create their innovative artwork, you might find something slightly unreal about the alacrity with which subculture becomes corporate culture." 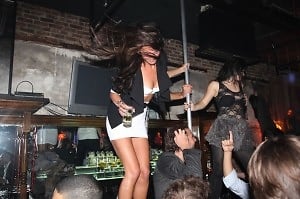 He ended with a swell line about Crocs, whose flagship store is across the street. Not far away is Don Hill's, the joint primarily responsible for Trebay's Fashion Week epiphany, the lowering of his cynical guard and realization that, wow, Manhattan nightlife might be bouncing back from rock bottom.

"'We all know what happened to New York,' the promoter added, citing a well-rehearsed litany: AIDS, night-life crackdowns, bottles-and-models bars, the Crash and, then, the Slump. 'Rents went up and pushed out the artists, hedge-fund types came in and creativity died..I swear to God. It's my mission to bring it back.'"

Against all odds, Trebay admits "it was working." He notes that party people seem to actually be partying, rather than:

"...marking the fact of one’s own existence with a trail of electronic crumbs...At some point, people got so involved in thumb-tapping reports about the ball they were allegedly having that the good times rolled right by."

Could the good times be here again? Will the combustible mix of people--Trebay and colleague Sarah Maslin Nir both hail the democratic and surprisingly diverse composition of top Fashion Week parties--hitting spots like Don Hill's keep it up once the tents are down? Or will mainstream nightlife once again find itself out of style?