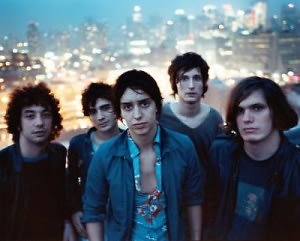 The Strokes will play the Metropolitan Opera House on Sunday as part of a Tommy Hilfiger event celebrating the designer's 25 years in fashion. The vibe is "rock 'n' roll meets prepster," a combination that will inevitably lead to a party that's neither rock nor prep. No matter. Rock fans are still up in arms.

Looking at some of the individual high-profile club openings this Fashion Week, a familiar theme emerges: the conflation of glossy nightlife and grungy rock & roll. The Strokes playing the Met in honor of Hilfiger follows the official big reveal of the new Don Hills, the formerly seedy punk dive taken over by trend masters Nur Khan and Paul Sevigny and, like Sevigny's shuttered Beatrice Inn, refashioned into a sort of theme park dive bar for people who would never sit foot in a real one. The once-dangerous Iggy Pop, following a promotional appearance at Barney's Co-Op last month, plays Don Hills tonight.

This is nothing new, really. Don Hills hosted MisShapes and catapulted the eponymous DJ trio into the fashion stratosphere. Car ads have featured Iggy's "Lust for Life" for at least a decade. And members of the Strokes famously came from posh backgrounds, flitting around between 5th Avenue floor-throughs and Swiss boarding schools before buying black skinny jeans and resettling in Alphabet City.

The idea that selling out is a crime, or even avoidable, is a quaint one. An anemic record industry requires even vaguely edgy artists to pimp themselves to corporations if they want to be heard by more than a dozen indie fanatics in a Bushwick DIY space.

But that doesn't mean music fans are happy with the latest Strokes booking. We'll turn to, where else, the Brooklyn Vegan comments section for feedback:

"too bad the strokes aren't from bushwick, then they'd be cool"

"but will there be any black people there?"

"A completely derivative band of poseurs. Perfect for the occasion. Next: Bar Mitzvah's of the elite."

Strangers things have happened, anonymous commenter. These days, it's not just the models striking a pose during Fashion Week.