[Tom Ford says "f you" to the traditional fw routine] Tom Ford debuted his glamorous women's wear line with a little help from models like Beyonce (who skipped out on the VMA's for Ford!), Julianne Moore, Mairsa Berenson, Rita Wilson, Lisa Eisner, Joan Smalls, and more.

Tom Ford's Super Secret cocktail party/show at his Madison Avenue Salon was a super impossible show to see (only 100 friends were invite and photos won't be released until January!) Check in on our favorite tweeters that made it in:

@Derekblasberg: Tom Ford is the ultimate. He is controlling the music during the debut of his collection, turning it down and up as he verbalizes his return about 15 hours ago via OpenBeak

@Derekblasberg:"And she just turned me straight..." Tom Ford sighs, referring to Joan Smalls about 15 hours ago via OpenBeak

@CathyHorynNYT: Beyonce just came out, in gold sequins! about 15 hours ago via ÜberTwitter

@HilaryAlexander: Fabulous fun sexy glamour see-thru shirts and Beyonce wiggling in silvrr and gold and black mesh python pattern modelling at tom ford about 2 hours ago via Twitter for BlackBerry®

@Derekblasberg And Tom Ford gets better and better... Marisa Berenson, Rita Wilson, and Julianne Moore, who blows kisses at her daughter, Lisa Eisner... about 14 hours ago via OpenBeak

@Derekblasberg : "Diamond and platinum jewelry, all her own," Tom Ford says of his last model, the Honorable Daphne Guinness, closing his show. WOW WOW WOW! about 14 hours ago via OpenBeak 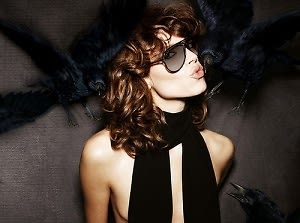