About this event
Last night a special presentation and benefit to support Street Soccer USA (SSUSA) took place at Cipriani Wall Street. Team jerseys were presented by official sponsor The Promotion Factory to all 8 players on the National team before they head off to compete in the Milan Homeless World Cup during the week of September 6. Notable attendees included Matilda Cuomo (former First Lady of New York State and founder of Mentoring USA foundation), Shep Messing (former American soccer goal keeper), Maggio Cipriani, and a mix of Street Soccer USA supporters and fans. â€œSoccer is very much about people and Street Soccer USA is taking this a step further by restoring confidence in people who have misfortune in life. Being on the team has a significant impact and is helping them get back on their feet,â€ says Venanzio Ciampa, President of The Promotion Factory, a communications agency. Ciampa, a lifelong soccer fan and a frequent player, organized the original celebrity soccer match â€œShowdown in Chinatownâ€ in 2008. 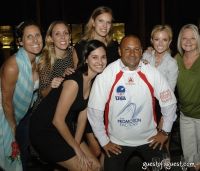