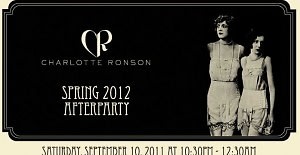 Fashion Week has only just begun, and there's plenty to do! It's time to figure out where the parties are this weekend. Make sure to check out our Calendar Page and follow us on Twitter as well! Also, check out our coverage of last night's Fashion's Night Out.

ELLE Fashion Next Show When: Fri, Sept 9th. 7pm - 9pm Where: Invite Only Why: Winners will be selected by a panel including Linda Fargo, Joe Zee and Anne Slowey  [Details]

Prabal Gurung SS12 After Party When: Sat, Sept 10th. 10pm -2am Where: Invite Only Why: After party of designer Prabal Gurung's Spring/Summer 2011 collection. [Details]

Root Management Party When: Fri, Sept 9th 8pm - 12am Where: Invite Only Why: Root Management celebrates NYFW exclusively with Shotty's first ever show on the East Coast. [Details]