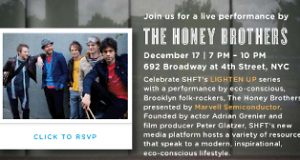 It's time to figure out where the parties are this weekend and below are our picks. Make sure to check out our Calendar Page and follow us on Twitter as well.

The Honey Brothers at the Wired Store When: Fri, December 17, 7pm-10pm Where: Wired Store, 692 Broadway, New York, NY Why: Performance from the band as part of SHFT's Lighten Up Series Details

Dancing at Doubles When: Fri, December 17, 7pm-12:30am Where: Doubles Why: Proceeds go to benefit the Grosvenor Neighborhood House YMCA Details