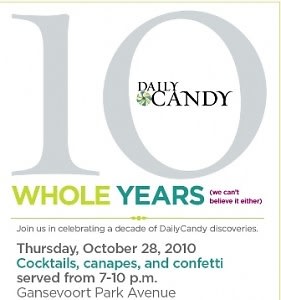 It's time to figure out where some of the parties are tonight and below are our picks. Make sure to check out our Calendar Page and follow us on Twitter as well.

Veuve Clicquot Yelloween Party When: Thu, October 28, 9:00pm-12:00pm Where: The Bunker Club Why: Like we said yesterday, We'd like to give The Bunker a try for ourselves Details

Daily Candy's 10th Anniversary When: Thu, October 28, 7:00pm-10:00pm Where: Gansevoort Park Why: A good portion of the media world will be in attendance including Jason Binn, Dennis Crowley and designer Rebecca Minkoff Details