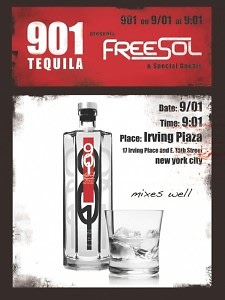 901 Tequila Freesol Concert When: 9pm-1am Where: Irving Plaza Why: 901 Tequila and co-founders Justin Timberlake and Kevin Ruder are hosting a concert for National 901 day [Details]

Erik Madiganheck's Exhibition After Party When: 11pm-4am Where: SoHo Grand Why: Afterparty book launch and opening exhibition of 'January to August' [Details]